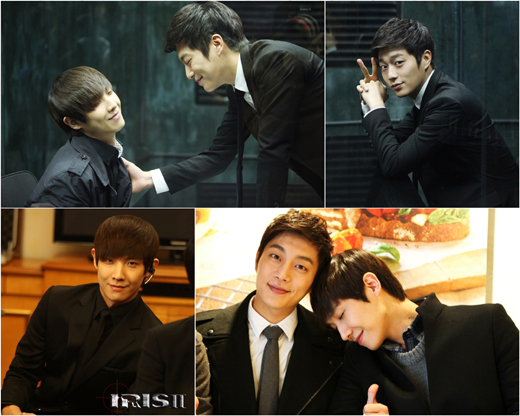 The latest behind-the-scenes stills from the set of “Iris 2” show MBLAQ’s Lee Joon and BEAST’s Yoon Doo Joon have fun filming together despite the high tension between their characters on the show.

In one photo, Yoon Doo Joon is practicing a scene with Lee Joon in which he has to grab Lee Joon’s shirt by the collar. Despite the heated emotion of the scene, the two idols/actors are smiling, showing off their synergy. In another picture, Lee Joon is seen laying his head softly on Yoon Doo Joon’s shoulder, while the latter is holding his thumb up, continually emphasizing their off-screen friendship and chemistry.

According to a representative from the drama, Lee Joon and Yoon Doo Joon spend their off-camera time practicing together, showing a lot of passion for acting. The rep stated, “Both are acting as endorphins on the set with their passionate and bright energy.”

Here are stills from the actual scene.