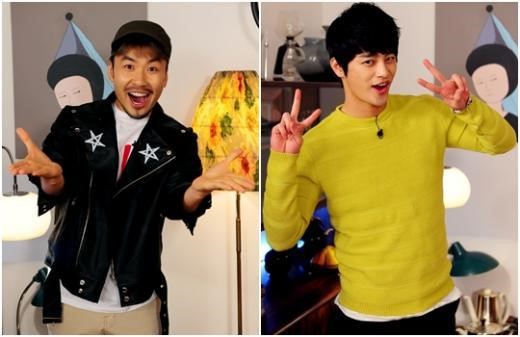 What happens when a neat freak meets a slob?

On the April 5 episode of the new MBC variety show, “I Live Alone,” television entertainer Noh Hong Chul visited the singer/actor Seo In Guk’s house and couldn’t hide his surprise at its state.

Noh Hong Chul is famously known in the media industry as a neat freak who won’t allow even a particle of dust settle in his house. So upon visiting Seo In Guk’s apartment, Noh Hong Chul grabbed his nose and asked the multi-talented artist, “What is this smell? Can’t you smell it? They say the olfactory system experiences fatigue the fastest.”

Seo In Guk, who doesn’t mind a mess or two, responded vehemently, “The house smells? Do I smell? I can’t tell at all,” and proceeded to sniff himself, bringing laughter to the set.

Noh Hong Chul described in detail for Seo In Guk, “It smells like a wet rag.”

Seo In Guk later revealed in a separate interview, “I was shocked. Even though I am younger than him, to say it smells…Isn’t rude to say this in another person’s house?”

Hmm, curious. Does Seo In Guk’s house really smell that badly or is just a neat freak’s weird perception?

Seo In Guk
Noh Hong Chul
KPLG
Home Alone
How does this article make you feel?