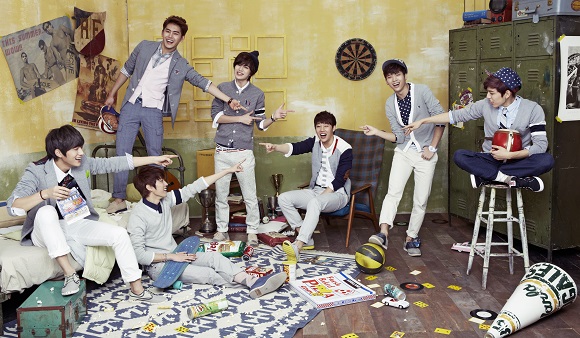 After getting close several times in the last two years, Infinite finally scores their first No. 1 song on our chart with “Man In Love.” This song was not even in the top 10 last week. It was able to move up 19 spots, easily passing 2AM’s “One Spring Day,” our champion of the last two weeks. “Man In Love” is from Infinite’s fourth mini-album “New Challenge.” It is a dance number that showcases the boys’ strengths. The song holds lyrics about the things a man encounters when in love. The catchy melody is expected to capture listeners’ ears right away. Infinite’s last three hit songs “Be Mine,” “Paradise,” and “The Chaser” all were No. 2 songs on our chart, now they finally get their first taste of No. 1. Congratulations.

Last week was the second week in a row that the three major TV music show rankings have different No. 1 songs. Infinite’s “Man In Love” was No. 1 on SBS Inkigayo, while G.NA’s “Oops!” was No. 1 on KBS Music Bank but only No. 6 on our chart. Davichi’s “Just The Two Of Us” was the No. 1 song on M!Countdown, and debuts at No. 3 on our chart this week. This is the title song from Davichi’s second full length album “Mystic Ballad.” “Just The Two Of Us” was written Vibe’s Ryu Jae Hyun, who wrote Davichi’s debut track “I Love You Even Though I Hate You” back in 2008. This acoustic ballad is expected to interest women in their 20s and 30s.

One other new song in the top 10 is at No. 7. It is the first hit song in two years from hip-hop duo Supreme Team, as they recently released a digital single appropriately titled “Thanks 4 The Wait.” The title song “You Can Stay” moves up 12 spots to No. 7 this week. This is a song of hope and strength. Singer songwriter, Crush lends his voice for this song.