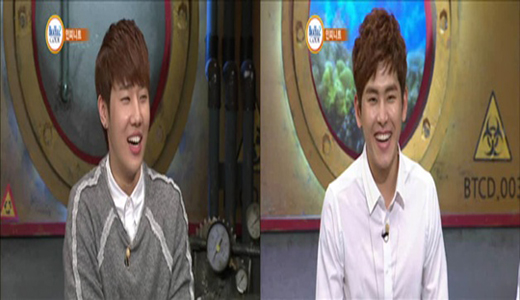 On the April 8 episode of Mnet’s “Beatles Code 2,” Infinite’s leader, Sunggyu, confessed he once told teammate Hoya, “You’re not an actor. Come back as Infinite’s Hoya.”

Sunggyu explained he said this to Hoya because, “After the drama, even his stare changed into that of an actor.” To this, Hoya responded, “While I didn’t have dreams of becoming an actor, after the drama I gained a lot of confidence.” He added, “It’s a given that people change.”

When asked by the “Beatles Code” hosts if he was jealous of Hoya, Sunggyu responded, “I am happier than anyone else for Hoya’s success as an actor” but “a singer shines the brightest on stage and I was worried that Hoya would forget his original profession by going too far down the actor’s path.”

Meanwhile, Infinite is topping the music charts with their latest single, “Man in Love.”

Hoya
INFINITE
Sungkyu
KPLG
Beatles Code 2
Answer Me 1997
How does this article make you feel?