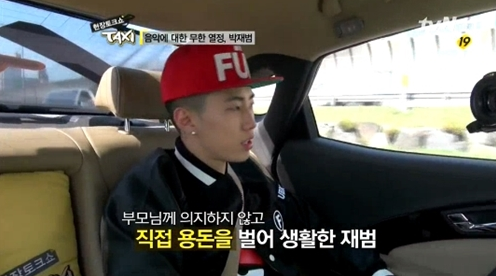 Jay Park Worked at a Tire Shop after Leaving 2PM

On the April 8 episode of tvN’s talk show “Taxi,” Jay Park talked about his time in the U.S. after he left 2PM.

When asked by the host Jun Hyun Moo, “What did you during the six months after you left 2PM?” Jay Park answered, “I spent time with my friends and family. I also participated in B-boy competitions. I even worked part-time at a tire shop. I wanted to earn my own spending money. I didn’t want to rely on my parents for that. My parents had a harder time than I did when I was getting criticized.”

Jay Park added, “I didn’t think too much about making a comeback as singer. But I was given the chance after I uploaded a video of my singing online.”

Jun Hyun Moon then asked, “I heard you were approached by different agencies because of that video. Did they include an American agency?”

Jay Park replied, “Yes. An American agency did approach me. Anyway, I made a comeback after that and I also had a change in attitude. I think my sense of responsibility also got stronger.”

2PM
Jay Park
Taxi
KPLG
How does this article make you feel?