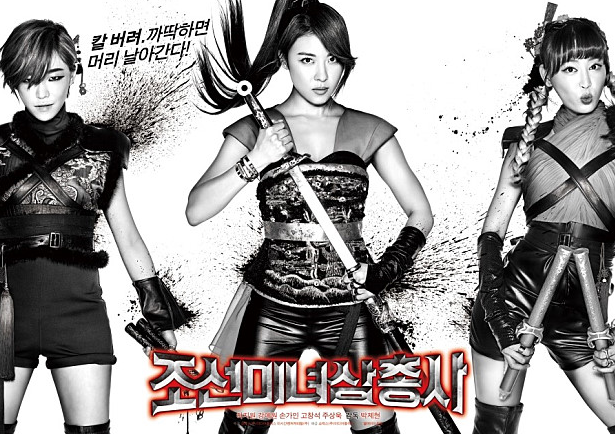 Character posters for “Joseon Trio of Beauties” (or “The Huntresses” or “Action Girls”) have been unveiled, showing Ha Ji Won, Kang Ye Won, and Brown Eyed Girls’ Ga In as legendary bounty hunters of the Joseon dynasty.

“Joseon Trio of Beauties” is a fusion, action-comedy movie that stars the three ladies as basically the Joseon version of “Charlie’s Angels,” who use their skills to save the country from danger.

Ha Ji Won is the leader of the group and her character is described as quick, smart, and highly skilled in martial arts. Kang Ye Won is the married member who cares first and foremost about money and Ga In is the final third member who acts before thinking.

The posters have caused a bit of stir as critics reacted against the lack of accuracy and believability caused by the appearance of eyeliner on the actresses and their outfits. In response, representatives of the movie explained that since the movie is a fusion sageuk, the actresses are wearing a combination of modern and traditional East Asian outfits. They added that viewers will feel different about the outfits once they have seen them in the context of the movie.

Here is the trailer so you can see for yourself:

Ga In
Ha Ji Won
Kang Ye Won
KPLG
Joseon Trio of Beauties
How does this article make you feel?