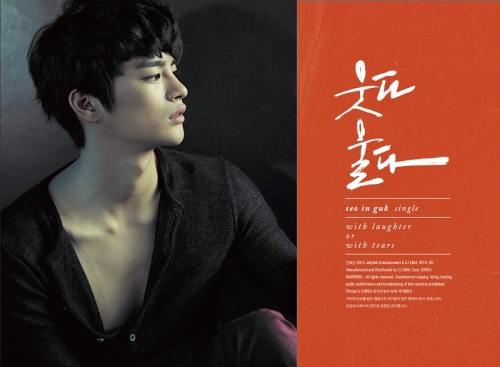 Seo In Guk, who has been busy with acting projects for the past year (“Answer Me 1997” and “Rascal Sons”) is finally making a return as a singer!

It’s been a year since his last mini album, “Perfect Fit,” and for fans, it has been a long wait. But Seo In Guk is bringing his voice back to the music scene with a new single album titled, “With Laughter or With Tears” (or literally in Korean, “I Smiled and Then I Cried”).

“With Laughter or With Tears” is a soul-ballad with a calm R&B rhythm played by a nylon string guitar. As a genre never before tried by Seo In Guk, the singer is showcasing a different style of singing that emphasizes restrain and subtle emotions.

The single album includes, as we previously reported, a song composed and written by actress Goo Hye Sun. Although she has written songs for herself before, this is the first time she has written a song from someone else.

Seo In Guk will be having his first comeback performance today on April 11 on “M!Countdown.” Stay tuned to Soompi for the performance video later today.

Here is the full music video for “With Laughter or With Tears” featuring Goo Hye Sun. I must say, they make a cute couple:

Seo In Guk
KPLG
How does this article make you feel?