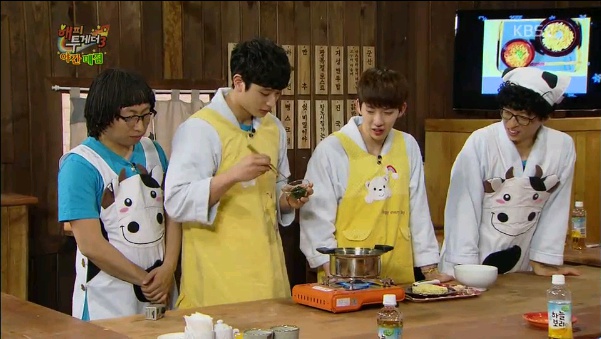 On the most recent episode of KBS “Happy Together 3 – Late Night Snack Shop,” 2AM‘s Jo Kwon and Jinwoon revealed their secret recipe for “Seaweed Fulvescens Ramyun.” Jo Kwon introduced the snack, “I like white-soup ramyun and Jinwoons like seaweed fulvescens. So we put them together one day and learned that the ramyun taste better with seaweed fulvescens.”

MCs Yoo Jae Suk and Park Myung Soo tasted the food as they were introducing it and they could not stop saying, “This is so delicious,” “This is it! This is what it is!.” and “This is the perfect hangover food.” Yoo Jae Suk, who is also known as the “National MC,” even temporarily put aside his role as the MC of the show and finished the Jo Kwon and Jinwoon’s dish without saying a word. Once he was done, he could not stop complimenting the dish.

However, 2AM’s “Spring Ramyun” made with seaweed fulvescens and white-soup-based ramyun lost against Yang Hee Eun‘s “Spring Seol Gi (steamed rice cake and milk)” and was not registered at the late night snack shop.