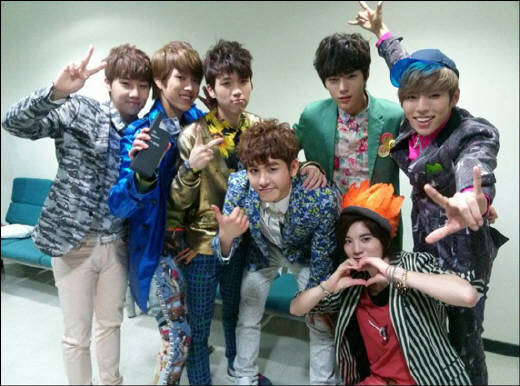 Inifnite firmly secures the top spot for the second consecutive week with “Man In Love.” This song swept all the music show rankings last week and thus able to win by more than 100 points this week. It is the only song to score above 900 for the week.

Debuting at No. 2 this week is Lee Hi’s “Rose.”Lee Hi was last seen at the same No. 2 spot just two weeks ago with “It’s Over.”Both songs are from her first full length album “First Love.”Part 1 of the album contains five tracks was released with “It’s Over” as the main track. The full album was later released with ten tracks and “Rose” as the title song.This is perhaps a new strategy courtesy of YG Entertainment and may eventually replace the repackaged album concept.

“Rose” is an interesting song as Lee Hi goes for a more mature look. The song itself written by YG’s main producer Teddy and is more popish than her previous hits.“Rose” already accumulated 800+ points in its first week on the chart and has a good chance to challenge “Man In Love” for the top spot next week.

At No. 3 is the first top three hit for Girl’s Day, as their “Expectation” rises another spot this week. As mentioned two weeks ago, the group’s previous chart high was at No. 4 and this time they finally cracked into the top three. Congratulations.

There are two other new songs in the top 10 this week. Moving up seven spots to No. 7 is Younha’s latest hit “It’s Not Like That.” Younha returns to the top 10 for the first time since the first week of 2011 when her song “Please Take Care Of My Boyfriend” was at No. 9. Younha teamed up with NaUl for the first time for this emotional ballad.This song was rumored to be written about NaUl’s broke up with actress Han Hye Jin, but he denied that.

For the third straight week Davichi has a different song in the top 10 of the chart. Just three weeks ago, Davichi had the pre release album track “Turtles” in the top 10. Then last week, the duo hit No. 3 with “Just The Two Of Us,” the official title track of the album. That song surprisingly only lasted for one week. Now Davichi is back with “Be Warmed” at No. 9. This is also one of the songs on their second album and was re-released it as a digital single. This time Davichi joins is joined by Verbal Jint, who composed, penned, and arranged this song. It is an acoustic hip-hop ballad number with an R&B base. This refreshing number is perfect for the season, and shows yet another side of the duo.