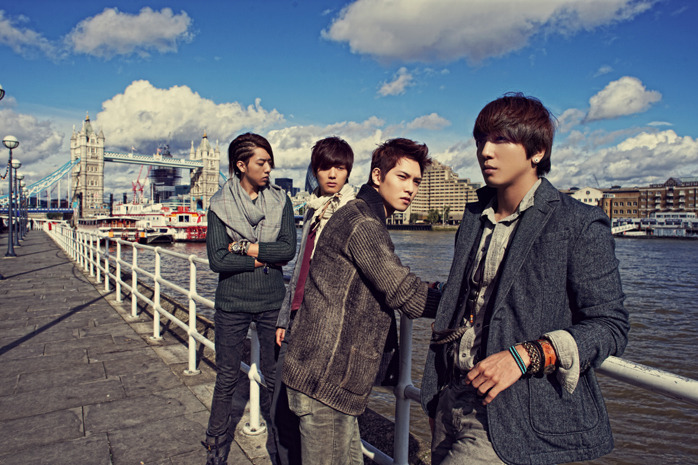 CNBlue Members Name Ideal Types But Get Stonewalled by a Question

Four-member pop-rock band CNBlue named their ideal types but were left speechless with a question about girls. Girl groups, in particular. The band were guests on MBC’s “Section TV” on April 14 for its “Starting” segment.

After interactions with students for the segment, guitarist and vocalists Jung Yong Hwa and Lee Jong Hyun, drummer Kang Min Hyuk and bassist Lee Jung Shin sat down for an interview, with questions raised from the students themselves.

The members revealed that when they are together, they do talk about women, like how males usually are. The host then asked them to name their ideal types. Lee Jung Shin’s answer was Lee Bo Young, with whom he acted in the weekend drama “My Daughter Seo Young.” The bassist said, “I think it’s because she’s not very typically just feminine. That’s her charm.”

For his part, Kang Min Hyuk did not put a name to his ideal type, but someone “bright and pleasant.”

However, a question that stumped the CNBlue members was “Who is your closest girl group?” The members all stayed silent and the only answer was Kang Min Hyuk’s sigh.

Meanwhile, CNBlue has completed the second leg of its “Blue Moon World Tour” in Singapore on April 13, which will continue on to Bangkok for the next stop in early May. The band is set to release their fifth major Japan single “Blind Love” on April 24.