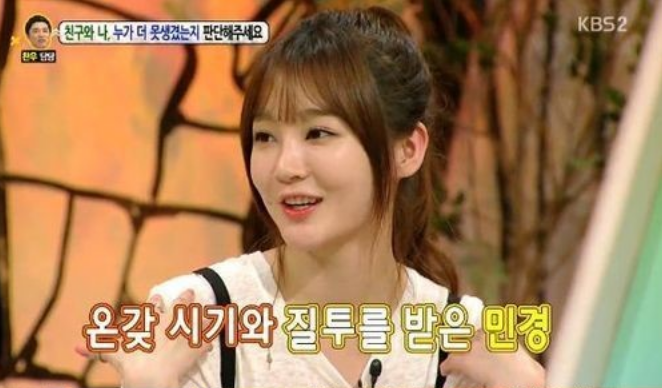 On the recent episode of KBS’s “Hello,” which was aired on April 22, Davichi’s Kang Min Kyung revealed her past difficulty in high school. Kang Min Kyung stated, “When I was in high school, I moved and changed schools. As soon as I arrived at the new school, all the students ignored me.” She continued, “It was only for two weeks, however. At the time, the other students heard the rumor that I was a trainee. I also had long hair. I think they bullied me because of the fact that I was a trainee.”

Kang Min Kyung then revealed that she solved this problem by herself. She said, “I can’t stand things like that. So I approached the other students first.” When MC Shin Dong Yup agreed, “Kang Min Kyung has an outgoing personality,” MC Lee Young Jah asked him how he knew. Shin Dong Yup answered, “I did a show with Kang Min Kyung for a long time.” To this, Lee Young Ja joked, “How come you don’t know much about me when we worked together for many years?”