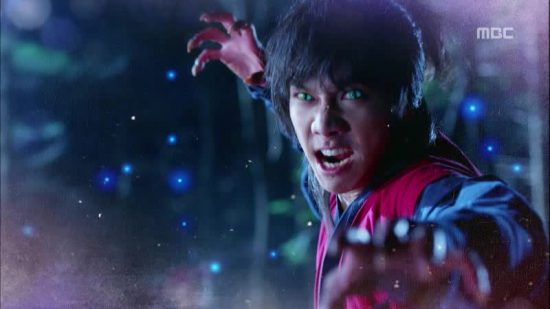 Did you watch that latest episode for MBC’s “Gu Family Book“?

In episode six, broadcast April 23, Lee Seung Gi, who plays the half-beast, half-human Choi Kang Chi, transformed into a beast, revealing for the first time his true identity. To add to the tension, he transformed in front Yeo Wool, played by Suzy.

In this change, Lee Seung Gi’s eyes turn green, his hair grows white, and his hands turn into claws. Fans of the show have started to call this form of Choi Kang Chi as the “Dark Kang Chi.” The episode ended with this transformation, with Choi Kang Chi about to attack, leaving viewers hanging on the edge of seats. Next week promises to be an exciting week with Yeo Wool, the other drama characters, and Kang Chi himself reacting to the revelation of his real identity. Till now, he has only been known as the fiercely loyal yet troublesome, abandoned child raised by a kind-hearted inn keeper. Viewers are curious to know how Yeo Wool and Kang Chi’s foster family will react to learn that he is a fearful half-beast.