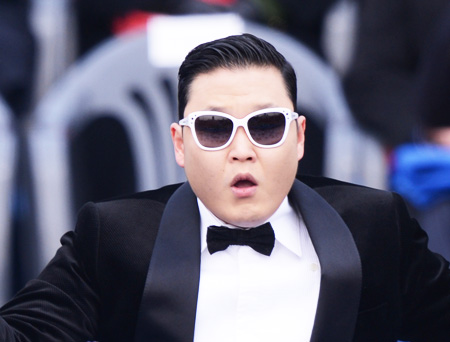 There was nothing to stop PSY’s “Gentlemen” from taking the top spot this week.

It only took “Gentlemen” two weeks to reach the top spot on our chart, same as “Gangnam Style,” and it was only four points shy of a perfect 1000 score.The only blemish was at KBS Music Bank K-Chart, where “Gentlemen” was ranked at No. 2 behind K.Will’s “Love Blossom.”“Gentlemen” did take over as No. 1 on K-Chart this week, so we may see a perfect score for this song next week. Despite the fact that PSY is not scheduled to perform this song on any music shows, its popularity is not affected at all.

“Gentlemen” is also the second digital single which to ever hit the No. 1 spot on our chart. 2NE1 did it last year with “I Love You” last year.Both songs are coming from YG Entertainment artists, who once again defy the odds.

K.Will’s “Love Blossom” was a hard luck second again this week. Its score of 952 points is enough to win in almost any other week. This song did pick up wins on music shows but its overall score is unfortunately not high enough as the competition turns up a few notches now that we are heading into summer.

Besides “Gentleman,” there are three other new songs in the top 10. Moving up 24 spots to No. 6 is Seo In Guk’s latest hit “With Laughter Or With Tears.” He has been gaining a lot of popularity both in his music and his acting. “With Laughter Or With Tears” is a soul ballad with R&B rhythms. The sad guitar melody brings out the mood of a man’s honest feelings after a breakup.

Jay Park returns to the top 10 at No. 9 with “JOAH,” moving up 22 spots from last week. This is a medium-tempo R&B number with strong, addictive beats along with Jay’s soft and powerful vocals. The song is about the thrill and excitement a guy feels when in love.

Up 18 spots to No. 10 is Lyn’s “Tonight,” a preview song from her just released eight album part 1. It is an R&B number featuring rap from Bae Chi Gi and holds love lyrics exchanged by the two singers. Lyn has just released part 1 of her 8th album.The title track “Breakable Heart” is expected to hit our chart soon.