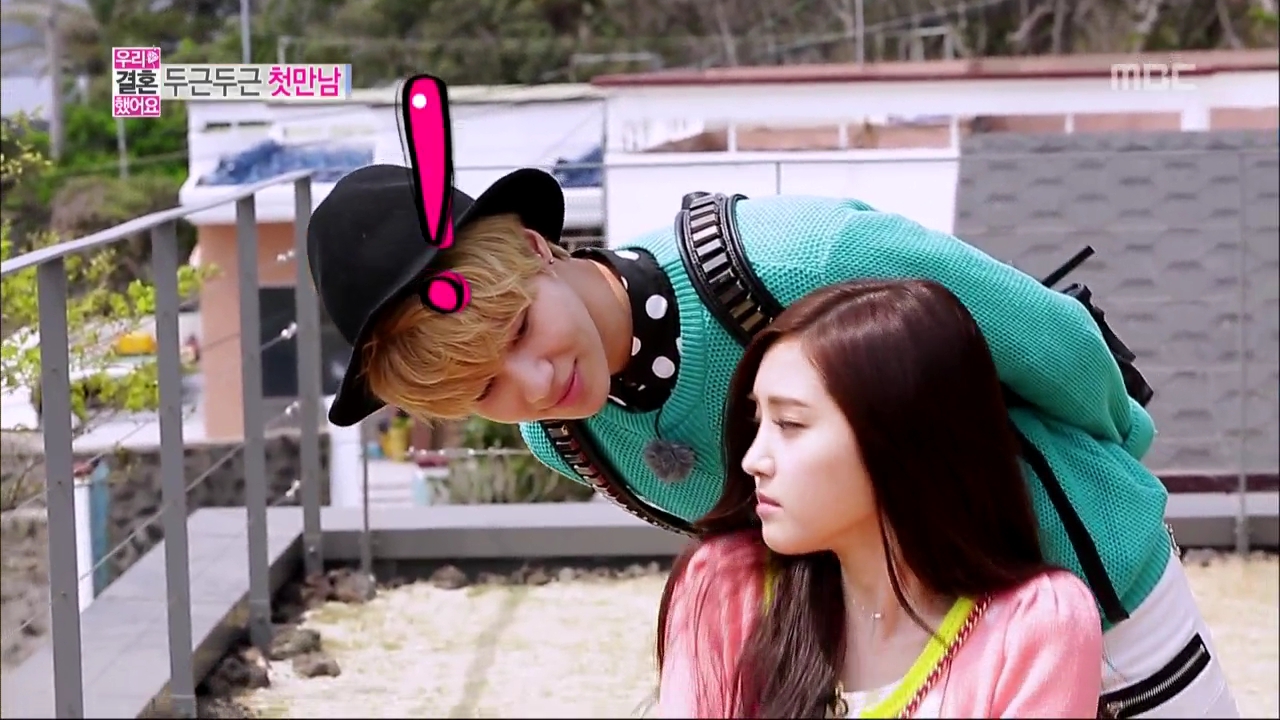 When it was rumored and then announced that SHINee’s Taemin and A Pink’s Son Na Eun would become the newest “We Got Married” couple, a lot of fans wondered what kind of couple they would make. Now the highly anticipated “Tae-Eun” couple has made their debut on “We Got Married” and boy, are they cute. These two idol visuals had their first awkward meeting and it can only be described as “adorkable.”

So here are the ten adorakable moments from Tae-Eun’s debut episode. Be prepared for awkward silences, TaeMAN, smooth seatbelt moves, and Mommy Key.

Also, if you haven’t yet, check out our gallery of “11 WGM Idol Couples That Broke Your Heart.”

1. Mommy Key: If SHINee’s youngest Taemin is getting married first, you better believe Mommy Key has plenty to say about it. He gives Taemin advice on how to be a good husband, worries for him, and even shows him how to properly put on a seat belt for someone. Meanwhile Onew is…wishing he could get married to chicken. No really, he actually says he wants to do WGM with chicken. Would I watch such a ridiculous show? Yes, yes I would.

2. Unpredictable Na Eun: A Pink’s visual makes her appearance! Na Eun shows that she’s not just some boring beauty. First she shyly confesses she has never kissed a boy other than her father and then she says she wants to be a vampire. That was unexpected. Later we discover she may not be as prim and proper as she appears.

3. Awkward Taemin: Were we expecting anything else? He may be trying to become TaeMAN but I’m glad cute Taeminnie is still there. The first thing he says to his wife is, “Are..you my marriage…partner?” Probably not his smoothest moment. Even though there are some awkward silences here and there, we can see that he is really trying.

4. Ideal Drawings: Such a contrast. Here we have Taemin’s quickly scribbled drawing of his ideal type that sort of looks like Na Eun but also looks like Maetel. Then we have Na Eun’s very thoughtful and detailed drawing about her ideal man. She even writes out in the bottom, “Let’s be the happiest couple in the world.” You might want to step it up a little bit Taemin.

5. Ideal Types: The awkward moment when Taemin confesses that he chose her as his ideal type but it turns out Na Eun might not have felt the same way about him. Don’t feel too bad Na Eun, Taemin had no clue that the two of you went to the same middle school (even though you shared a P.E. class!).

6. Lose the Jondaemal (formal speech): This is only the first time meeting so it’s natural to feel a bit awkward, but when will the two of you speak comfortably? Taemin, if you want to her to speak banmal, you have to initiate it first. Don’t give up!

7. Why are Seat Belts So Difficult?: When the opportunity came to put his “seat belt lessons” to use, Taemin may or may not have performed spectacularly. The important thing was that Na Eun was touched by his efforts. I’m sure Mommy Key watched that part, laughed, and then shook his head.

8. Surprisingly Compatible: Who would have thought these two were so similar? Not only do they share the same faith, they both love meat and lose their things often. Not sure if this is a match made in heaven just yet, but since Na Eun is down to try “extreme sports” things are looking good.

9. Smooth Taemin: As awkward as he can be, there is a gentleman inside of Taemin. When he’s not trying so hard, sometimes he says the right things. Like sincerely telling her that even though he prefers to hang out with guys, “I like being with you.” Or telling her that he has “magic hands.” I bet you do, Taeman, I bet you do.

10. Bonus – The Jinwoon Doll: This isn’t Tae-Eun but it was so cute it definitely belongs on this list. 2AM’s Jeong Jin Woon made some sort of pillow/doll with his face on it for Go Jun Hee when she went to Las Vegas for a photo shoot. If I had something like that I would be sleeping with it every night.

That’s all for this recap. What do you think of this new couple? Did they meet your expectations or are you hungry for more? Leave us a comment below!