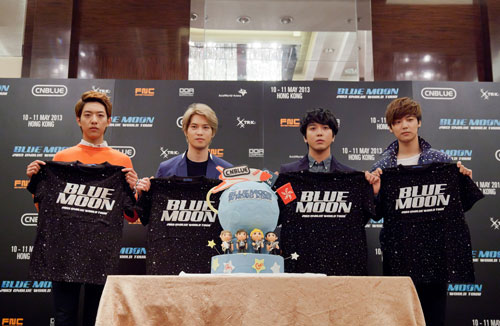 CNBlue, who held a press conference in Hong Kong on May 9, announced that the group donated the proceeds from the concert T-shirt auction to the Hong Kong Red Cross.

CNBlue stated, “These t-shirts are meaningful to us since it has the title of the world tour, ‘Blue Moon,’ printed on it and we wore it on stage. We hope they are good gifts to fans and that they will be used for a good cause.”

CNBlue has previously also donated the proceeds from a bracelet auction in Thailand.

CNBlue holds the Hong Kong leg of their “2013 World Tour- Blue Moon” concert series May 10 and 11 at the Asia World Expo Arena. It is the largest stage in Hong Kong able to hold 7000 people. The original and only concert date tickets of May 11 were sold out in five minutes, leading to CNBlue adding an extra date on May 10. CNBlue will reach a total of 14,000 Hong Kong fans in the two days.

CNBLUE
KPLG
2013 World Tour- Blue Moon
How does this article make you feel?