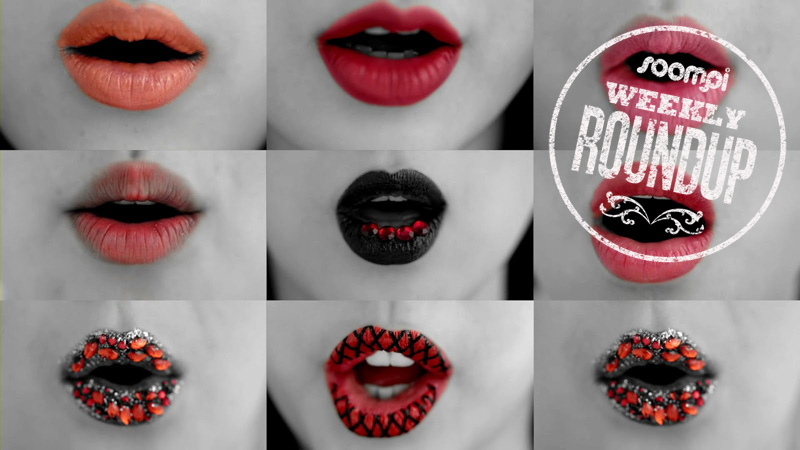 Welcome to the Soompi Weekly Roundup (Ver. 2.0)! Every weekend we will highlight all the important news that happened this week, so you can catch up on anything you may have missed.

This week had some great and long awaited comebacks such as 2PM and Lee Hyori, but neither of the two won this writer’s choice as music video of the week. East met up with West a few times this week with Snoop Lion (aka Snoop Dogg) getting friendly with the YG girls, PSY making friends and enemies with American celebrities, and Will and Jaden Smith met up with actors, singers, and more singers. There were plenty of surprise announcements, some unsurprising updates, hospital trips, and of course plenty of gossip to tingle our ears.

The Gossip of the Week: Hong Yoo Kyung’s father speaks out about his daughter’s unfair boot from A Pink (his words). ACube insists that everything was agreed upon (their words).

Runners Up: “A” and Park Shi Hoo drop their charges against each other with no explanation at all. All that drama and did they really think they could slip away quietly just like that? Also Shinwa’s Andy apologizes about his loose tongue after Sohee firmly denies being the one from JYP who asked Teen Top’s Niel out. So is it Suzy? Someone else? Or maybe Niel just said that to get his CEO off his back.

Next… Several big names made their comebacks this week. Who do you think is number one?

Comeback of the Week: Lee Hyori is our “Miss Korea” even though she claims it was pretty stressful. It was a tough choice between her and our beastly idols, 2PM, but she won this through her seniority and because it was her birthday.

Runners Up: It’s been more than two year since 2PM promoted in Korea and we are really glad they are back, even if they teased us with some really mind boggling teasers. Nine Muses teased us too, and made their comeback licking their lips.

Music Video of the Week: B1A4 always has visually stimulating music videos with either their cinematography or their adorable faces, and “What’s Happening” has both (plus an awesome pillow fight)!

Runners Up: Nega Network’s first male group LC9 made their debut with “Mama Beat” and boy was it… bloody. It was a little weird to see our 2011 Ullzzang winner get whacked by a hatchet. Nine Muses had some red in their music video too, but they were definitely targeting a different audience.

Next… Lee Seung Gi wins because of his naughty hands, and everyone loves a pepero kiss.

Drama Moment of the Week: Lee Seung Gi uses his character in “Gu Family Book” to unleash his naughty hands on Suzy! Or he’s just that dedicated of an actor. You choose.

Runners Up: Yoo Ah In gives Kim Tae Hee what every woman secretly wants, a back hug. Also, the upcoming drama “Shark” teases with a very captivating video.

Variety Show Moment of the Week: Many of us hold the secret hope that one day Gary and Song Ji Hyo will announce, “The Monday Couple is real! We really are in love! We’re getting married!” Until then, this Pepero kiss will have to do.

Runners Up: Son Na Eun can’t decide if she’s married to Taemin or Taeman while her group is going through some controversy but maybe T-ara N4 can give her some tips on how to not follow in their example.

Next… Who knew a gallery of girls crying would be so popular?

Gallery of the Week: Super Junior’s Yesung quietly headed off to the Army and although he said he would not make a public appearance, his fans tearfully waited for him anyway. Without context, looking at the pictures you would have thought he died. Military service is only two years!

Runners Up: Red carpet arrivals for award ceremonies are always fun to look at because the dresses tend to either be hideous or beautiful. Cast your judgement for the Baeksang Art Awards. Also, Girls’ Generation members are often awful more than not when it comes to throwing pitches but they keep getting asked. I wonder why.

Pictorial of the Week: Actress Jang Young Ran proudly showed off her baby bump and her baby in a sweet photo shoot. How many kids can say that they were in a photo shoot when they were still attached to an umbilical cord?

Runners Up: Lee Hyori is always picture perfect for magazine pictorials and Kim Woo Bin is a gentle spring man.

Next… and our celebrity of the week is…?

SNS of the Week: The lion dances with the lamb! Snoop Lion (Dogg?) takes Minzy’s hand as Sandara Park laughs in the background in a video.

Runners Up: Eleven year old Sulli used to hang out with some famous oppas and uncle. Jang Geun Suk celebrates Parent’s Day like any good son by showing off his mother.

Celebrity of the Week: Now Clara may not be an A-list celebrity but it seems that she has certain assets that made her pretty popular. I’m sure it must be her bright personality. Either way we saw plenty of her this week and who knows; maybe she will continue to titillate us with her unabashed photos.

Runner Ups: Congratulations to Han Hye Jin on her wedding (“I am not pregnant” she says) and to Lee Ji Hyun (former member of Jewelry) who is pregnant!

That’s all for this week’s recap. See you next week!