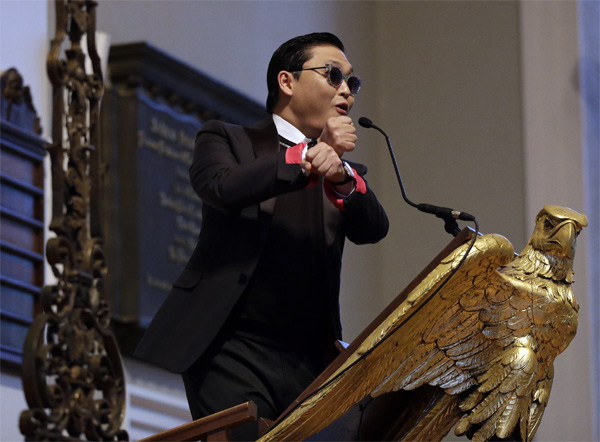 Psy’s “Gentlemen” withstood tough competition and remained No. 1 for the third straight week.“Gentlemen” was the only song scoring over 900 points this week.

We have five new songs in the top 10 this week, including the No. 2 and 3 songs.

Debuting impressively at No. 2 is Cho Yong Pil’s “Hello,” the title song from his 19th album.This song replaces “Bounce” which was in the top 10 last week As mentioned last week, Cho Yong Pil is one of the most respected Korean singers. He always try to experiment with new sounds. On this new album, his first release in ten years, most of the songs are written by foreign songwriters. The title track “Hello” features popular rapper Verbal Jint, bringing a hip-hop element to the retro sound of the song.“Hello” was No. 1 on KBS Music Bank this week.Let see if it can overtake “Gentlemen” next week on our chart.

Moving up 21 spots to No. 3 is the latest hit by 4minute, “What’s Your Name?”This is the title track of their fourth mini-album, “Name is 4Minute” and was produced by Brave Brothers. It is a hip-hop number that is expected to capture listeners’ ears right away. This song will be one of several contenders for the top spot next week.

Juniel is back in the top 10 this week with her first sophomore release “Pretty Boy,” from her third mini-album “Fall In L.” Juniel was the runner up of the new artists award on our chart last year.This time she makes a 180 degree transformation just in time for spring.  Fans will be able to see her lovable and lively side through her title track, “Pretty Boy.” It is a bright, upbeat pop rock number with fun lyrics. This week it moves up 16 spots to No. 6.

SHINee is also back with their latest hit “Why So Serious?” making a 22-spot jump to No. 8 this week.This is the title song of Part two of their third album “Why So Serious? The Misconceptions of Me.” “Why So Serious” is a pop dance number with electronic and funk rock sounds. The song holds lyrics about a zombie who falls in love with a girl. SHINee hit No. 1 earlier this year with “Dream Girl,” the title song of Part One of their third album. Let see if they can repeat success from earlier this year.

Debuting at No. 9 is Lyn’s new song “Breakable Heart.” This song is from Part 1 of her 8th album. A pre-released single “Tonight” was on the top 10 just two weeks ago and is now replaced by this song. “Breakable Heart” is a sad number with a piano melody. Lyn took part in penning the lyrics to the song herself.