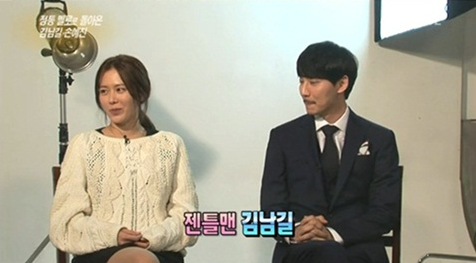 On the May 11 broadcast of KBS’ “Entertainment Relay,” viewers were taken behind the scenes of the poster shooting for the upcoming drama “Shark.” Its leads, Son Ye Jin and Kim Nam Gil, were also interviewed and Son Ye Jin revealed a surprising fact about Kim Nam Gil.

The actress said, “It might be because of his previous dramas but my image of Kim Nam Gil before I met him was that of a bad guy.” She revealed, “But his real personality is cute and he has a lot of aegyo,” surprising everyone.

Kim Nam Gil explained, “Son Ye Jin brings out the aegyo in us.” He added, causing laughter, “An aegyo competition has started between the male actors.”

Netizens who saw this interview commented, “I didn’t know that about Kim Nam Gil and I can’t imagine it,” “I want to do aegyo in front of Son Ye Jin too, ” and “Son Ye Jin would bring out the aegyo in anyone.”

You can watch the first visually stunning trailer for “Shark” here.