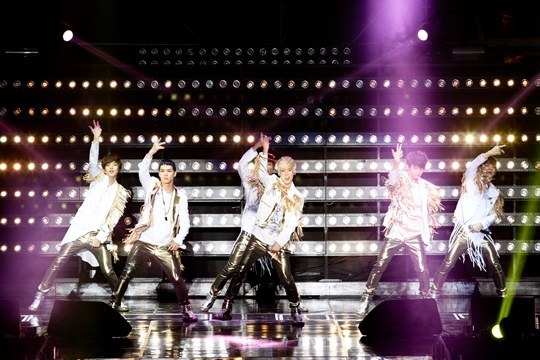 Idol group Teen Top showed that they are all grown up in their first solo concert.

On May 11 and 12 the group held their first solo concert in Seoul as part of their “TEEN TOP No.1 Asia Tour.” Thousands of their fans packed the stadium to watch what Teen Top has prepared the past three years since their debut.

The group opened their concert with the title track of their first full album, “Miss Right” and then went into “Walk by…” and “I Wana Love.” With these songs Teen Top started their concert energetically and excitedly.

They then performed “Baby U“, “Beautiful Girl“, and “Girlfriend” and switched to a more relaxing atmosphere. However, the group aroused jealousy from their fans when they danced with the female dancers during “Beautiful Girl.”

Through the concert it was easy to see how much Teen Top has matured the past three years. The youngest Ricky revealed how much he has grown by singing his solo song, Alex‘s “It’s You,” with his sweet voice. Chunji sang Jungyeob‘s “Are You OK?” in a mature voice and deepened emotions. Also, Niel and C.A.P.‘s duet cover of Zion.T‘s “Two Melodies” was performed in a cool atmosphere, as if they were at a bar.

Of course, Teen Top also performed their most popular songs such as their debut single “Clap” and “Supa Luv.” Unlike their recorded performances, fans were able to hear and feel the stomping and clapping of their energetic choreography. They also performed “Missing You“, “Stop Girl“, “To You“, “Why“, “Sweet“, and “Crazy.”

They also broke off into their sub units and performed some special tracks. C.A.P., L. Joe, and Changjo showed off their rapping abilities through their “Mr. Bang” performance. L. Joe and Changjo also performed “Jealousy” and had a dance performance, where Changjo worked the fans in a frenzy by revealing his abs.

Teen Top also did a special rendition of Sistar19‘s “Gone Not Around Any Longer.” They wore white button up shirts and did the famous invisible chair dance in a sexy performance that would have made Sistar19 proud.

At the end of the concert the members of Teen Top thanked their fans and their agency. Niel said, “I want to thank our company’s president. Also, I want to thank Andy. I also want to thank the family at our agency for all their hard work.”

L. Joe promised, “We will always be grateful to ANGEL (Teen Top’s fan club). Thank you all for coming here today.”

Through this concert Teen Top and their fans became one. The faces and loving messages of the fans that showed on the screen during the songs will be something Teen Top will never forget. Changjo even teared up and cried as he was so touched. At this Niel said, “It’s like the time we won first place for the first time.”