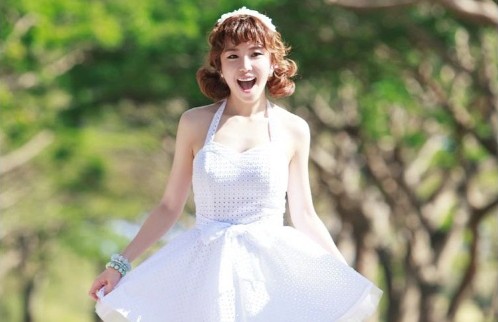 Secret‘s Hyosung has recently been criticized for the wrong usage of the word “democratization.”

On May 14, Hyosung and the other Secret members were guests on SBS Power FM’s “Choi Hwa Jung’s Power Time” radio show. During the show, Hyosung commented, “Secret is a team that respects each other’s own traits. We don’t try to democratize the team.”

However, the word “democratization” has been given a new meaning in the Internet world among the netizens in the recent days. Rather than its original meaning of “to make democratic,” which has a neutral connotation, the word “democratization” is being used to mean, “attacking a small group of people if their opinions and thoughts differ from the majority.” The word is being used with a very negative connotation among netizens, especially on online community forums and portals.

After Hyosung used the word, netizens began to criticize her. So TS Entertainment stepped forward and spoke with My Daily by saying, “Hyosung meant to say ‘Our team is not democratic’ instead of ‘We don’t try to democratize the team.’ Hyosung did not know that the word ‘democratization’ was being used differently among netizens these days. She is reflecting upon her misuse of the word right now.”

Not long after, Hyosung tweeted on her personal account, “Hello, this is Secret’s leader, Jeon Hyosung. I apologize for misusing a certain word today on ‘Choi Hwa Jung’s Power Time.’ I am reflecting on my actions of using an inappropriate word without even knowing the exact meaning. I’m sorry. I will be more careful so that this never happens again. I apologize to you all once again.”

Meanwhile, Secret is carrying on their promotions for “Yoo Hoo.”

Secret
KPLG
Jeon Hyo Sung
How does this article make you feel?