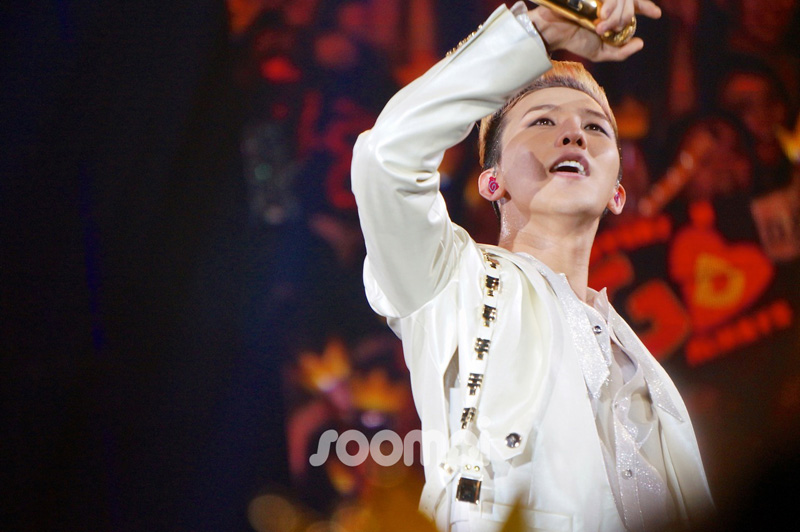 Another awesome concert recap from Soompiers Shirley & Rachel, two Americans living it up in Taiwan. Aren’t these photos amazing? -soomp

On May 9th and 10th, G-Dragon held his “One of a Kind” concert at Taipei Arena, almost entirely selling out both nights at the 10,000-seat stadium, a feat testament to his ever-present popularity. It was evident that Taiwan loves GD, and his concert did not disappoint in the least. GD is one of our favorite artists. When we found out Taiwan would be one of the stops on his tour, we didn’t hesitate and bought tickets for both nights.

Like many of the other concerts we’ve attended at Taipei Arena, (see our M!Countdown Recap), vendors lined the walkways. For this one, the sheer number of knock-off light sticks, posters, stickers, and a seemingly infinite number of GD picture fans showed how incredibly appealing (and profitable) the 24-year-old is. Amped up for a great show, fans showed their love and support with “Giyongchy” hats, “One of a Kind” tees, and Big Bang flower lights. A few even sported some of GD’s distinctive looks, such as the “Crayon” drummer boy outfit complete with the bleached-blond ‘do, and the “One of a Kind” look with long, yellow braids.

The master of charisma himself opened the show with his most recent single “MichiGo”. He made a dramatic entrance as the curtain dropped to reveal a crystallized-version of the Batmobile. Dressed in fiery red, a color that would set the tone and tempo of entire concert, GD exited the vehicle with flair.

He strutted out with a dragon-tipped cane, a tasteful prop that he utilized throughout the show not only to cement his status as a full-fledged icon, but also to help out at times with his previous ankle injury. We felt that the addition, regardless of the injury, flawlessly complemented his powerful stage presence.

After effectively revving up the audience, GD upped the energy with his popular hit “Heartbreaker” from his first solo album, sending everyone into throes of familiar ecstasy.

NEXT: One of a Kind, Future Tablo, and that Segway

“One of a Kind” was the first number of the night from GD’s current eponymous album. While vigorous and bold, we began to notice some aftereffects from GD’s sprained ankle. As his back-up dancers jived to the beat, GD omitted certain moves, however; deftly enough that it barely caught out attention. Nonetheless, persisting through the quick choreography made him appear all the more committed and professional. This man was on a mission to impress, and impress he did.

As an artist with many tracks that feature different artists, GD had a creative solution for his solo tour. Though the use of hologram-like images, the collaborators’ images were projected on moving screens, giving off a very life-like appearance. The first of the holographic songs was “Light it on Fire” featuring Epik High’s Tablo. Because of the nice technology, we mistakenly thought it really was Tablo when GD introduced him. The crowd broke into applause at the thought that another unexpected YG artist would make an appearance. Yet, when it became clear he was a hologram, the concept still kept our attention because it was so unique. The hologram moved on stage along with GD and at one point, GD even pretended to mop the “sweat” from Tablo’s face, showing off his humorous side.

Next, GD performed the equally exciting “The Leaders” with hologram CL of 2NE1. At the start of the song, GD zoomed onstage expertly riding a Segway.

The Segway made a few appearances throughout the show, with GD impressing us each time with his skills. We can’t imagine it’s very easy to sing and drive at the same time! His long white cape only added to the overall wow factor.

When the holograms sang their parts, GD used the breaks to interact more with the audience. He would run from side to side of the main stage, waving, smiling, and dancing. Throughout the concert, these personal touches proved to us that GD was just as excited to be performing, as the audience was to be in his presence. His heartfelt demeanor, expert singing skills, and confident swagger, combined with the impressive visual effects, created a superbly compelling spectacle.

NEXT: Butterflies, Windmills, and GD misses you!

We came to the first interlude as GD went backstage to prepare for the next song, “Butterfly.” Astronomical images played on the giant screens on stage as the audience took a break from the high-energy numbers. The video was not only calming but also artistic, perfectly setting the mood for the slower pace of “Butterfly.” Dressed in all white, GD took the stage once more as beautiful butterfly kites flew around him. He sat on the main stage for part of the performance, seamlessly switching from the too-cool hip-hop star to a serenading, lovesick puppy. As if entranced by the beauty of the butterflies, GD took time to admire the kites, even playfully chasing after them at times. The entire number was wonderfully lighthearted and enchanting.

Next came the similarly slower-paced song “Missing You.” Accompanied by a hologram of Kim Yoon-ah of Jaurim, “Missing You” was a catchy but more melodic song than some of the rap-heavy pieces. Reflecting the change of speed, GD preformed the entire song sitting crossed-legged on stage, showing off a calm and peaceful demeanor.

Following “Missing You”, GD officially greeted the audience. Speaking Chinese, he coyly asked them: “How are you?” and “Did you miss me?” In response to the screams of “Yes,” he replied “I really, really, really, really, missed you!” While he spoke primarily in very good English, his occasional forays into Chinese were heartfelt and very much appreciated by the Taiwanese audience. His language skills were pretty good, especially his English!

Another wonderful moment of fan interaction was the game that GD played with the audience. On the May 9th performance, GD separated the crowd into “baby” and “honey” groups. He would encourage audience participation by asking each side to scream to see which one would win his favor. Not only were the terms of endearment adorable but they also showed GD’s playful side.

On the May 10th performance, GD deviated slightly from the previous night’s script as he mischievously hinted, “You know what I’m going to do.” This time, GD showed off his Chinese skills as he split the crowd into “baobei” (loosely translated into “baby”) and “qing ai de” (“my love”). The audience, especially returners from the last night, were ecstatic. As we were lucky enough to attend both performances, the small differences between shows really made for great fan service.

Continuing with the slower tempo, GD took his place on a throne comprised of chains for “That XX,” a visually stunning and minimalistic performance. His ultra-talented guitarist accompanied him beside the throne. Donning a floppy black hat that shaded most of his face, GD reproduced the song’s themes of darkness and shadows. It was probably one of our favorite performances of the concert. The set-up was simple, yet very well thought-out, complementing the lyrics and overall ambiance of the song.

Next was “Without You” featuring Kim Yu-na. GD sported a sparkly gold jacket as gold spotlights moved around on stage and images of icebergs played in the background. It was another great melodic number supplemented with excellent backup dancing and vocals.

Don’t miss Part 2 of our coverage with DJ G-Dragon, special guest Taeyang, and get ready to get your CRAYON!