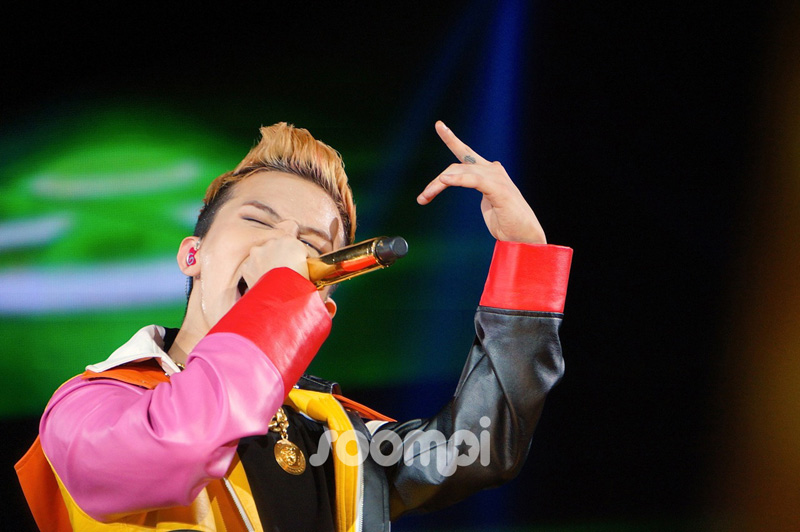 In case you missed it, check out Part 1 of our coverage of G-Dragon in Taiwan!

One of the most visually striking performances of the concert was “Today.” It was a number filled with confetti, impressive stage props, great dancing, and an awesome light show.

Outfitted in white, GD had a DJ table set up on an elevated part of the extended stage. The table was encircled by a series of gold studs, complementing the three giant studs on the main stage. The entire setup fit nicely with the entire YOLO sentiment of the song.

As GD performed on the studded DJ table, we couldn’t help but notice his awesome microphone attachment. It appeared to be a small saxophone, but upon closer inspection, we saw that it was actually a small, curved dragon-shaped stand. Even better, it was detachable, allowing GD to strut around stage with it for multiple numbers. The entire concert was filled with objects, like this unique prop, perfectly tailored to GD. We really loved all the personal details that went into designing the event.

Because GD was on the elevated stage, his back-up dancers were basically eye-level to us. It was the first time we really paid attention to them, especially the much-talked-about Kwon twins who have a cult following of their own. They were not only amazing at their craft, but also displayed a fun sense of humor as they dramatically mouthed the words to the songs. Their quirky side came out again as they moved their bodies to PSY’s hit “Gentleman” dance during the break leading up to the encore performance. Needless to say, we were really excited when we got to wave to our new crushes as their bus left the concert venue!

NEXT: Taeyang joins the fun

After “Today,” GD introduced fellow Big Bang band-mate Taeyang. Greeted by uproarious screams from the audience, Taeyang performed two of his own solo songs, including his hit “Break Down.” He made a sincere effort to speak Chinese, making for great fan interaction and demonstrated the good nature that Taeyang is known for.

His dancing was, of course, spot-on. The shirtless backup dancers didn’t hurt either.

GD came back on stage after Taeyang to perform “One Year Station.” We found it amusing that he wore a furry Virginia jersey.

The next interlude featured GD running in a video with a red filter (think Nike commercial). This acted as a great lead-in to “Obsession,” one of GD’s solo songs from his collaborative album with band-mate T.O.P. He came out in a black, hooded costume. Pulling his hood back, he revealed a plain black beanie ornamented with a single diamond-encrusted safety pin.

The most striking aspect of this performance was the theatricality. GD put on his most intense glare to express the feeling behind “Obsession.” As he rapped, he slowly made his way up a series of ladders on the stage, getting closer and closer to the object of his obsession, a woman wrapped in a velvet red cloth standing in a large gold filigreed portrait frame. As he comes close to reaching her, she falls out of the frame with the red cloth unraveling. The song ends with the red curtain descending over her.

GD pairs this image expertly with his next song “She’s Gone,” which expresses a similarly intense sentiment. Still up in one of the balconies, GD dramatically performs this emotional number while gradually descending back onto the main stage.

NEXT: Get your CRAYON!

Once the lights dimmed, GD exited and handed the stage over to his band for the third interlude of the night. We especially enjoyed the lead guitarist’s solo (shout out—Justin!). At the end of their great instrumental arrangement, GD flew back onto stage on a wire, wearing a striking headpiece comprised entirely of tablets as well as a colorful raincoat. The atmosphere took a much more light-hearted turn as GD prepared to perform the much-anticipated “Crayon.”

In contrast to the concert’s generally black-and-white, with sprinkles of red and gold, color scheme, GD really brought out the “crayon” part the song. A rainbow of backup dancers dressed in the trademark football uniforms surrounded GD as multicolored crayons flashed in the background. He spent much of this performance on the extended stage, to the elation of standing audience members. It was a wonderfully fun number and we were ecstatic to see GD get his “cray” on in person!

Mixed into the middle of “Crayon” was GD’s rendition of “Fantastic Baby,” one of the two Big Bang songs performed at the concert. GD did this one solo, singing and rapping all the parts, which made for a very unique performance. It made for a great treat for Big Bang fans, especially because the dancing was the original choreography.

At the conclusion of Crayon, GD waved goodbye and exited the stage in preparation for the encore. This is the first concert that we’ve attended in which “encore” was not chanted following the final number. Instead, and this must have been a fan club driven effort, the audience shouted “kajima,” which means “don’t go” in Korean. During the second concert, GD actually addressed this unique chant by pronouncing the only Korean words of both nights (other than the song lyrics, of course). He teased the audience by asking if they wanted him “to stay forever” and then quickly decided that he couldn’t possibly do that.

The first encore song was the hit “Breathe.” Dressed in sunglasses, a black cap, and a long leather jacket with “BOSS” proudly printed on the back, GD gave a wonderfully energetic performance. The Big Bang hit “Bad Boy,” quickly followed, with Taeyang making his second appearance of the night. Taeyang wore a matching leather jacket with “HOMIE” written on the back. The dancers, similarly, also wore yet another version that said “CREW”.

GD and Taeyang took turns singing the different members’ parts, as well as walking to different parts of the stage. On the first night, Taeyang even descended into the audience, to the delight of the fans standing in the front row. It must not have gone over too well since neither of them left the stage on the second night. As you can see from the picture, Taeyang looked pretty uncomfortable.

With the conclusion of “Bad Boy,” GD walked back to the main stage. “That’s it”, he said. “Time to say goodbye. My show. The concert. Over. I’ll never forget you so please don’t forget me.” He also promised to be back soon with his “brothers,” Big Bang, telling the audience to wait. Even more exciting, GD announced that his new solo album would be out in August!

GD then took time to introduce all the musicians and backup dancers. As GD exited once more, the male backup dancers stayed on stage with their backs facing the audience. After a brief pause, during which the dancers swayed back and forth (a few even busted some moves from PSY’s “Gentleman” dance), GD’s voice could be heard asking in Chinese, “One more time?” Once he was pleased with the level of noise coming from the audience, GD burst back on stage, riding his trademark Segway.

The final song of the night was a second performance of “MichiGo.” Coming full circle, we thought this was a wonderful and unique way to end the event. We doubt anyone walked away from the concert feeling disappointed.

Thematically, the whole concert fit beautifully together. At some points, it even felt like an intimate, artistic performance, which really set GD apart from other more mainstream acts. His creativity plus the great organization resulted in a concert that went above and beyond our expectations. Even though we attended both performances, the small details and his dynamic personality really mesmerized us for the whole ride. Needless to say, our heads (and hearts) were still spinning even after the BOSS left the building.

G-Dragon
Taeyang
How does this article make you feel?