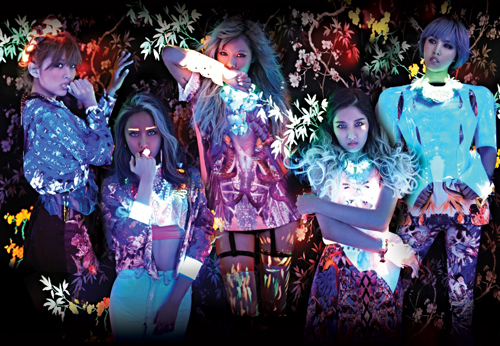 After a few weeks of male domination on top of our chart, girl groups have reclaimed the top two spots this week.

4minute’s “What’s Your Name?” moves up two spots to become our new No. 1 song.This is the third straight year 4minute has had a chart topping hit.They did it in 2011 with “Mirror Mirror” and last year with “Volume Up,” showing their remarkable consistency. “What’s Your Name?” easily won this week as it is the only song to score over 900 points.

No. 2 is a brand new song in the top 10.Moving up 15 spots to second is Secret’s “Yoohoo,” the title track from their fourth mini-album “Letter From Secret.” They return to a cute and lovely image this time with “Yoohoo,” which is an exciting synth pop dance track with cute lyrics about falling in love. “Yoohoo” will battle “What’s Your Name?” for the top spot next week and the scoring gap is expected to narrow.

There are two other new songs in the top 10 this week, both by female soloists.Moving up 20 spots to No. 5 is Younha’s latest hit “The Reason Why We Broke Up.”This is the title song from Younha’s second mini-album “Just Listen.”It is a song about a woman reflecting on her breakup.Younha herself took part in composing this song.

Debuting at No. 9 this week is the long awaited comeback from Lee Hyori.Her self-composed and written hit “Miss Korea” is our highest new entry of the week.The song is the pre-release single of her upcoming fifth album “Monochrome,” set to be released next week.This is Lee Hyori’s first release in three years.“Miss Korea” holds lyrics about women who live everyday uncertain about the future and constantly worry about how others see them. The song has more of an acoustic vibe than her usual hip-hop, dance style, making this song all the more anticipated.