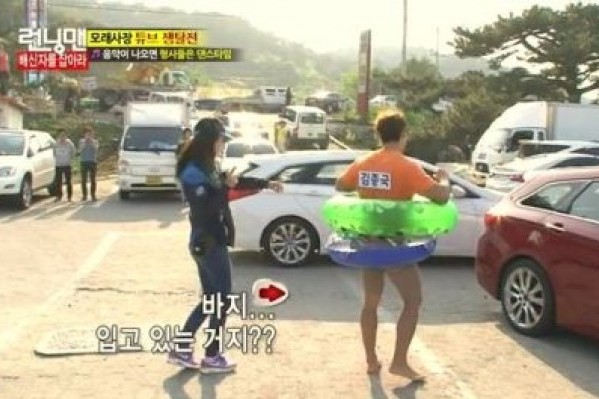 On the most recent episode of SBS “Running Man,” actors Kim Sang Kyung and Uhm Jung Hwa appeared as celebrity guests of the week. During one of the missions, cast members had to dance to Uhm Jung Hwa’s hit songs.

In doing so, everyone’s attention was drawn to Kim Jong Kook‘s pants. He had two water tubes around his waist and below the tubes, it looked as if he wasn’t wearing any pants because the color of the pants matched his skin color perfectly. Even the producers of “Running Man” noticed this “optical illusion” and pointed it out with subtitles pointing at his legs saying, “You’re wearing pants…right?”

Netizens commented on Kim Jong Kook’s nude color pants, “Is Kim Jong Kook trying slapstick comedy?” “I thought ‘nude optical illusions’ are only for female celebrities,” and “I really thought he wasn’t wearing any pants for a moment!”