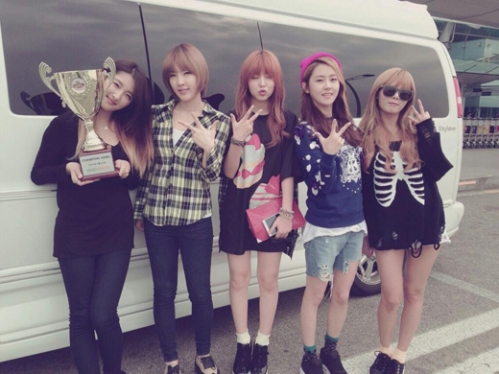 The top two songs remained the same this week with 4minute’s “What’s Your Name?” taking No. 1 for the second straight week. This song was only 12 points shy of a perfect 1000 score as it ranked No. 1 or 2 in all of our chart sources. Congratulations to 4minute.

Holding on to No. 2 is Secret’s “Yoohoo.”Despite narrowing the scoring gap, it is still more than 100 points behind “What’s Your Name?” Let see if this song will continue to gain ground next week.

Rounding off an all-female top three is Lee Hyori’s “Miss Korea,” moving up six spots from No. 9 to No. 3. This is the pre-release single from Hyori’s fifth album “Monochrome,” which was just released last week.The album’s title track “Bad Girl” is expected to hit the chart soon.

There are three new songs in the top 10 this week.

Moving up 14 spots to No. 5 is B1A4’s “What’s Happening.” This is the title song from the group’s fourth mini-album of the same name. Written by B1A4 members Jin Young and Baro, it is a pop and hip-hop number with rocktronic sounds. This addictive number has an easy melody line which is expected to have all listeners sing along. “What’s Happening” surprisingly won the top spot on MBC Music Core last week.It is B1A4’s first top five hit on our chart.

At No. 6, 4men returned to the top 10 with “Propose Song,” the title track from part two of their fifth album, “Thank You.” Composed and written by 4men’s frequent collaborator Mi, it is a pop ballad about a man getting ready to propose to his lover.

Moving up three spots to No. 8 is “Countryside Diary” from T-Ara N4, the first sub-unit from T-Ara. The quartet of Eunjung, Hyomin, Jiyeon, and Areum recently released their first mini-album. The song is an exciting club dance number that features SPEED’s Tae Woon. What makes this song even more special is the fact that traditional Korean instruments – gayageum, daegeum, jango, and kkwanggwari, were used.