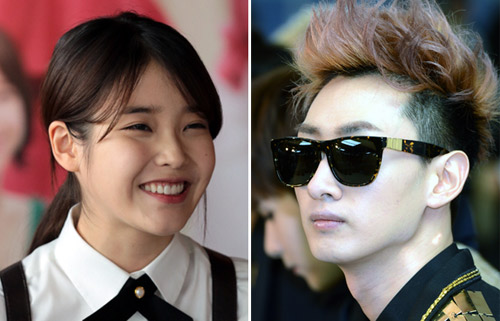 Currently on Korean search engines, singer IU and Super Junior‘s Eunhyuk have become the most searched terms. According to Asia Today, rumors of an October wedding between the two singers are circulating around the internet, drawing a lot of attention and buzz.

The media outlet reported that recently in an online community, a post titled “Popular female solo singer “A” expected to marry in October” was written. It was written in the post that a popular female solo singer “A,” who is currently receiving a lot of love leading a drama is secretly planning an October wedding. The groom-to-be had the initial “H” and was from a male group. According to the post, A’s agency is currently trying to dissuade its artist from marrying.

With IU currently playing the leading role in the popular drama “You’re the Best, Lee Soon Shin” and her scandal with Eunhyuk past November, it didn’t take long for readers of the post to connect “A” and “H” to IU and Eunhyuk, respectively. In November of 2012, a “scandalous” photo of IU and Eunhyuk together was uploaded onto IU’s Twitter account, causing controversy.

Media outlet TV Report contacted IU’s agency, Loen Entertainment, from which a representative stated, “We don’t know how to just laugh this rumor off. It’s absolutely ridiculous.” The representative denied the rumor, saying, “When it is time for IU to get married, we will make an official announcement. There is no reason to hide.”

Netizen response to the rumor has been diverse, ranging from fans expressing anger and/or doubt and others suspecting that the rumor was created as a cover up for more important, political/economical news.

Asia Today has deleted its article, which was linked to in this report and seems to be the originating source reporting the rumor. We have instead provided a screen capture of the article.