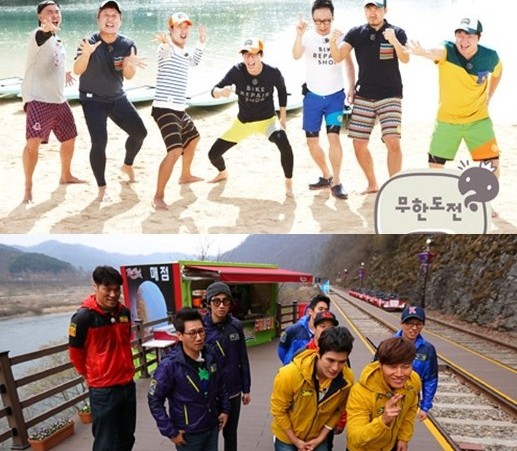 “Infinity Challenge” and “Running Man” are Korea’s Most Loved Shows

According to results from Gallup Korea, variety shows “Infinity Challenge” and “Running Man” are the two most loved shows by South Koreans.

Gallup Korea opened a poll from May 20 to 23, asking participants 19 years or older, “Which show do you like the most these days?” A total of 1217 people participated.

SBS’ “Running Man” was number two with 7.2% of the votes. In particular, it received a lot of votes from people in their 20s to 40s, whitecollar workers, and students. Interestingly, both the first and second place shows have Yoo Jae Suk and Haha as two of the MCs.

The MBC drama “A Hundred Years Inheritance” placed third with 5.7% of the votes, finding favor with females over 60 years old and housewives. KBS’ variety show “1 Night, 2 Days” was fourth (5.1%) with many votes from females in their 30s and another MBC drama, “Gu Family Book” place fifth with 4.3% of the votes, receiving a lot of love from 20 to 30-something year old women and college students.

Soompiers, let’s narrow it down. We ask, instead of all shows, “Which currently airing variety/talk show is your favorite show these days?”