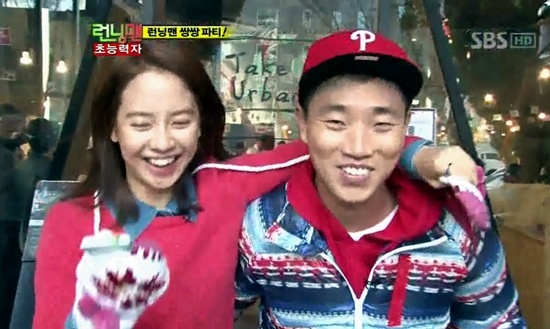 The “Monday Couple” of Gary and Song Ji Hyo gave more proof of how close they are on the May 4 episode of “Running Man.”

In the latest episode of the hit SBS “Good Sunday” show, the cast and guests continued playing the Mafia Game where the members were the “citizens” who had to seek out who among them was designated as the “mafia.”

While huddled and in the process of looking for the three mafia among them, Lee Kwang Soo mentioned that one of the three girls might be the mafia that they’re seeking out.

Gary was quick to suggest that they should start with Song Ji Hyo. In her defense, Song Ji Hyo pointed out that Gary was the one to be doubted because of his actions. “Gary oppa continuously covers for Lee Sang Hwa. If you think about it, the mafia could be him,” she said.

“In this world, Ji Hyo knows it best when I’m lying. She knows better than my mom,” Gary said, acknowledging Ji Hyo and making the members around him laugh.

Did you have a right guess on who the mafia was?