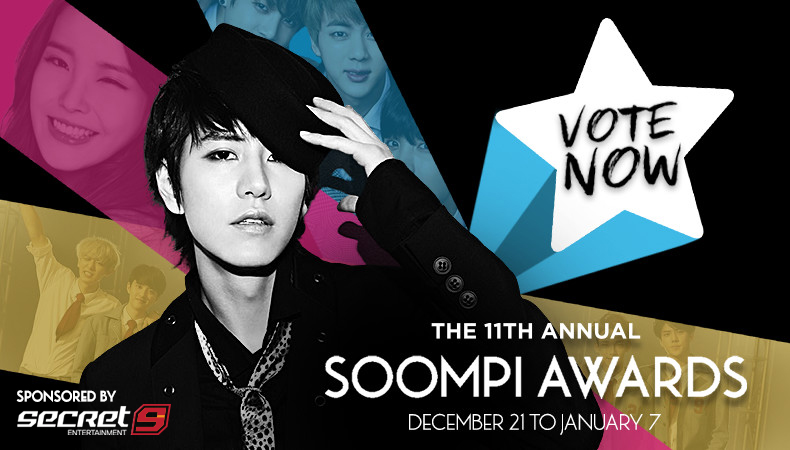 It’s the holiday season, which means it’s that time of the year again – welcome to the 11th Annual Soompi Awards!

Last year, you came, you saw, you conquered Twitter, LINE and web with over 23 million for #SOOMPIAWARDS2014. This year, we’re returning to the stage bigger and fiercer than ever, with both K-pop and K-drama contenders battling it out for top spot in 30 categories. Who will reign supreme and take home the crown? That’s up to you to decide!

In case you’re wondering why there’s a countdown on every voting page – this year will also mark the return of a MYSTERY CATEGORY that will only take place on Twitter during two specific 24-hour periods starting December 28 and January 3 at 8PM KST. Be sure to follow @soompi and the hashtag #TheBattleReturns on Twitter for the latest update!

Voting will last for two and a half weeks and will end on January 7. The winners will be determined by votes from the web, our accounts on LINE, and our Soompi Music Charts (as applicable). So download the LINE app now and get started – find Soompi under “Official Accounts” and add us, and you’ll receive instructions on how to vote! Voters will also automatically be entered into a giveaway for signed CDs and other K-ent merch, so be sure to get those votes in!

Last but definitely not least, we’re proud to introduce our special MCs of the event, Topp Dogg! You’ll see them introducing each nominee on our social media pages in the upcoming days, so be sure to keep an eye out! They also have a special pre-voting message for you…

What are you waiting for? Vote for your favorites in Soompi Awards 2015 now!

Soompi Awards 2015
Soompi Exclusive
How does this article make you feel?