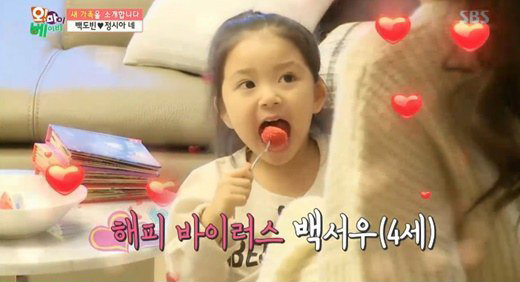 On the December 26 broadcast of SBS’s “Oh My Baby,” a new family was introduced: Baek Do Bin and Jung Si Ah, with their daughter Baek Seo Woo.

On the episode, actress Jung Si Ah and her daughter Seo Woo are spending time together reading. Adorable Seo Woo grabs viewers’ attention, leaving them with high anticipation for more of her cute appearances in the future.

Previously, Seo Woo had appeared on KBS 2TV‘s “The Return of Superman,” stealing hearts of many fans. Many wanted the family to join the KBS show, and Baek Do Bin and Jung Si Ah were even rumored to have met with “The Return of Superman” production team. However, the Baek family will be appearing on “Oh My Baby” instead.

Baek Do Bin
Oh! My Baby
The Return of Superman
Baek Seo Woo
Jung Si Ah
How does this article make you feel?