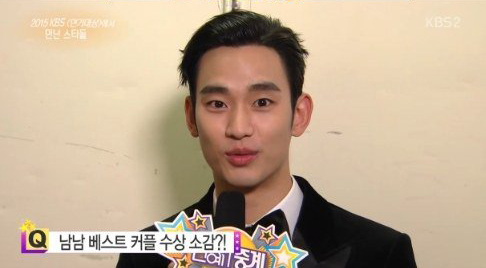 Actor Kim Soo Hyun talks about his feelings on receiving the Best Couple Award with Cha Tae Hyun for their work in the drama “Producer.”

On the January 2 broadcast of KBS 2TV’s “Entertainment Weekly,” Kim Soo Hyun and actress Go Doo Shim, who received the Grand Prize together at the 2015 KBS Drama Awards, answered questions during an interview.

“Entertainment Weekly” airs every Saturday at 9:15 p.m. KST and brings the week’s entertainment news to the viewers at home.