Former EXO member Tao has spoken up about SM Entertainment’s statement that was released on January 5.

The singer released a statement through his workshop’s Weibo account refuting the validity of SM Entertainment’s statement. In addition to the statement, his workshop included screenshots of emails as evidence.

Below is the statement from Tao’s workshop: 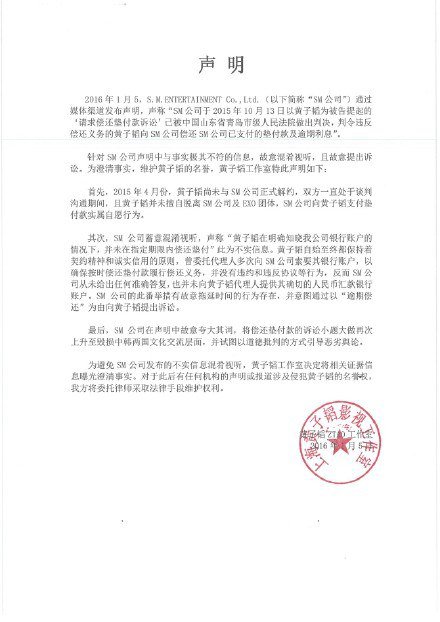 “On January 5, SM Entertainment released a statement saying, ‘SM filed a lawsuit against Tao for failing to repay SM on October 13, 2015. An intermediate court in Qingdao, China made the verdict that Tao is to repay SM Entertainment as well as interest for the delayed payment.’

The statement that SM Entertainment revealed on January 5 is untrue. In order to distinguish from right and wrong and to protect Tao’s honor we have released the following statement.

First, before Tao sought to nullify his exclusive contract with SM Entertainment in April 2015, both sides had been negotiating so SM providing temporary payments was a voluntary action.

Second, SM said, ‘However, despite clearly knowing the bank account number, he failed to pay back the temporary payments within the promised time.’ They hid the truth with this statement. Tao has continuously kept a ‘contract-centered mind’ and ‘principles of faith and trust.’ Tao has tried to repay the temporary payments through a representative multiple times and requested a bank account number from SM and has not violated his contract nor any agreements. However, SM did not reply clearly and did not provide the correct bank account number to Tao’s representative. SM intentionally filed the lawsuit against the ‘delayed repayment’ in order to buy time.

In order to block SM from distorting the truth, Tao’s workshop will submit evidence to dispute their statement. [Tao’s] workshop will take legal action against violations to Tao’s honor from all statements and reports in order to protect his rights and interests.”

What are your thoughts on the varying statements from SM Entertainment and Tao?