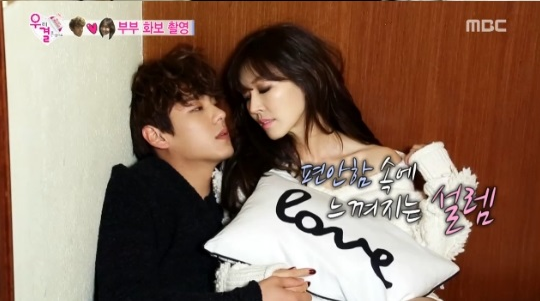 Kim So Yeon and Kwak Si Yang of “We Got Married” did a couples photo shoot on the January 9 episode.

The two tried their best to look like a real couple, which meant a lot of touching and being close to each other to portray intimacy. The real challenge came in the third concept of the photo shoot, in which they were asked to look like a couple on a bed.

One of the photo editors asked the two whether it would be okay for Kim So Yeon to pose on top of Kwak Si Yang. The two tried this, and afterwards, Kwak Si Yang said in an interview, “I thought I was going to die. I have never been so bold in posing for a photo shoot, so I was embarrassed, although it was good. I couldn’t focus.”

Kim So Yeon was in the same boat, saying, “I was trying really hard, and I wasn’t sure if I was too heavy. I could tell that I was completely red in the face, but I still wanted to do my best.”

See the adorable video below:

Kwak Si Yang
Kim So Yeon
How does this article make you feel?