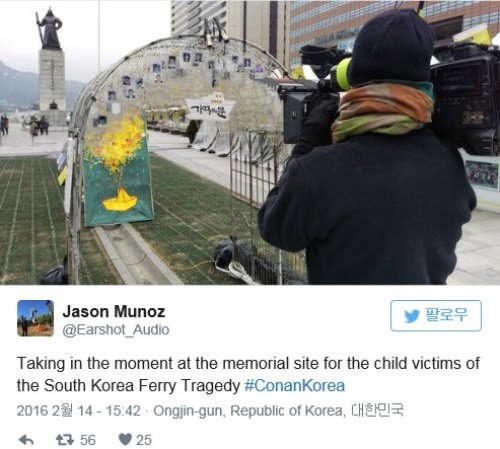 Sewol Memorial To Be Featured on Conan O’Brien’s Show

In the midst of news that Conan O’Brien is visiting Korea, there has been much attention given to what he has been up to during his trip here.

On February 14, ahead of Conan’s arrival in Korea, producers from his talk show “Conan” visited the Sewol Memorial at Seoul’s Gwanghwamun and filmed some shots there. They said that they plan on showing the sadness of what happened on the show. A producer from the show uploaded a picture from his Twitter that said, “Taking in the moment at the memorial site for the child victims of the South Korea Ferry Tragedy.” At this memorial, there are many pictures of the victims of the Sewol ferry tragedy posted around the site.

It appears that during his four day trip here, Conan O’Brien isn’t planning on just showing the happy and fun side of Korea but also the sadness that Korea has gone through to the viewers of “Conan” all over the world.

On February 15, he visited the Noryangjin fish market as well as Hongdae and other places around Seoul and on February 16, he will make a cameo on the MBC drama “One More Happy Ending.” It is said that he specifically chose this drama to cameo on. In addition, he will also hold a fan meeting, visit a traditional folk village, as well as do a special project with Park Jin Young, which is still under wraps. He will return to the United States on February 19.

Conan
Conan O'Brien
How does this article make you feel?