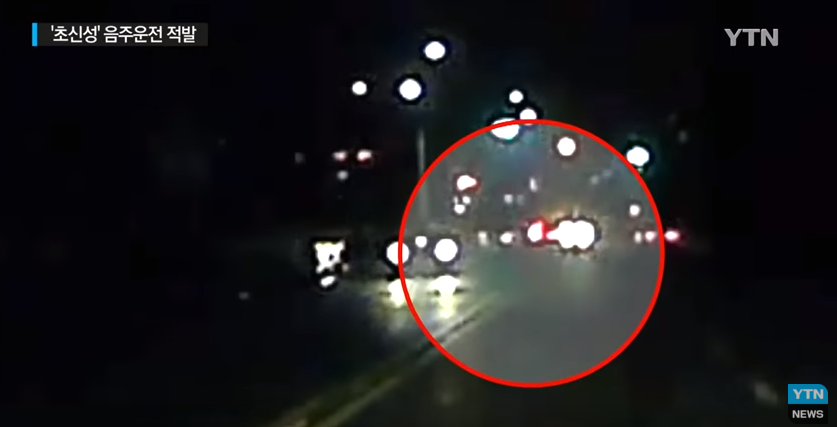 Local news source YTN has uploaded a video filmed from the black box of the police car chasing Yoon Sungmo of Supernova. He is driving the white car in the video circled in red. Yoon Sungmo was spotted making an illegal U-turn and was ordered by the police to stop, but he ignored it and ran away for about 1.3 kilometers (0.8 miles) before he was caught. During the chase, he crashed with a police car and one policeman was lightly injured. The reporter also describes how the car hits a telephone pole and the front is crushed, but the driver continues to ride away for about 300 meters more before he is finally caught.

Yesterday, it reported by MBN that a member of a male idol group that is popular in Japan has been arrested by the police after being involved in a drunk driving accident. According to the report, a 30-year-old (Korean reckoning) Mr. Yoon drove over the center line in a road in Samjeon-dong and made an illegal U-turn. He was ordered to stop, but he ignored it and tried to drive away. He then hit a telephone pole and continued trying to drive away, but after making a sudden left turn and stopping in a street in Seokchon-dong, the police car chasing him crashed into him. Two policemen were injured in the crash.

Netizens speculated Mr. Yoon was Yoon Sungmo of Supernova (Choshinsung), and later on, Maroo Entertainment, the agency that manages the idol group confirmed it with an official statement.

Maroo Entertainment wrote: “Yoon Sungmo had dinner with light drinks with an acquaintance and around 1:20 a.m. today [Monday, March 7 KST], he was on his way home, driving his own car. Because there were no cars on the road at that time of the night, he ignored the traffic light and was about to enter an alley when he saw a police checkpoint and was found to be drunk driving. After being tested, he was found to have a blood alcohol content of 0.092 percent and he has currently been sent home by the police.”

Maroo Entertainment also explained that it is still in the process of finding out more details and promises to reach out when the police investigation is complete.

Member Yoon Sungmo is reflecting on his mistakes, said Maroo Entertainment, and plans on fully complying with any further investigations. Maroo Entertainment also took the blame for not being able to take care of its artist properly and apologized for causing people concern.

Choshinsung
Supernova
Yoon Sungmo
How does this article make you feel?