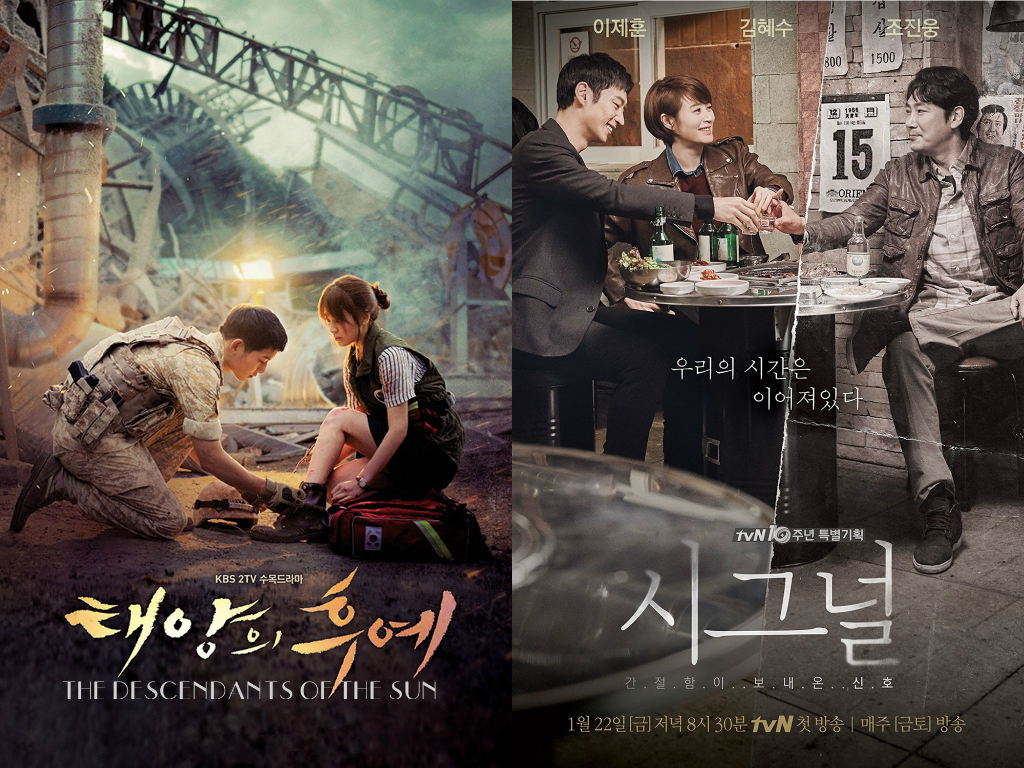 SBS is at a loss after missing out on the chance to air big money-makers.

The broadcasting company’s regret only grows with the exponential increase of the popularity of cable channel tvN‘s drama “Signal” and KBS2‘s “Descendants of the Sun.” The reason is that the two dramas, coming from a cable channel and a public channel, respectively, are becoming almost virally popular despite the fact that, ironically, they were originally being discussed at SBS with confirmed dates for airing, only to be canceled due to production issues. How did these two big hits slip through SBS’s fingers?

Honestly, no one expected “Descendants of the Sun” to be as popular as it is now. Since the success of SBS’s “Heirs” in 2014, writer Kim Eun Sook‘s “Descendant of the Sun” was being prepared to be aired in June of 2015. However, things didn’t work out as the parties involved failed to reach an agreement while discussing the production.

According to a source in the industry, SBS was uncertain about airing a drama with the main theme of disaster and war, even if it was a new work by star writer Kim Eun Sook.

The fact that the main male character, currently being played by Song Joong Ki, was a soldier made SBS even more doubtful. The reason being that, as a soldier, most of the scenes would require the character to wear only a military uniform, greatly decreasing the profits earned from wardrobe sponsorship for other outfits. The broadcasting company also considered the setting where the drama characters, such as soldiers or doctors, would be dispatched or sent overseas to bring too many limitations in the spatial background. SBS expected that the probability to be unable to receive corporate production support, in the form of Product Placement (PPL) for cars and the like, would be high.

Lastly, the fact that 70 percent of the drama would need to be shot overseas due to the setting and background, also added to SBS’s hesitation in airing the drama since it would have required an enormous production cost.

It was the same reason for “Signal,” which is penned by writer Kim Eun Hee. Genre dramas are good for publicity but the ratings ended up being comparatively low, according to previous cases. Since ratings lead to the sale of advertisements, low ratings can’t bring in large profits for a broadcasting company. The company also expected that PPL or other production cost support would be difficult to secure due to the story moving back and forth between the 1980s to the present.

Cases like these are common among broadcasting companies. For companies, it makes sense that they cannot approve airing a show without considering the profits. They have to calculate the advertisement revenue in the case of success as well as the additional revenue derived from said profits.

However, individuals in the industry also say that there is a danger in only pursuing commercial viability, as it can result in low-quality dramas. This is the reason why people say that companies should increase competitiveness through diverse stories, even if they fail commercially. Industry personnel are collectively saying that, due to the widening overseas market such as China, content diversity is becoming a requirement.

Descendants of the Sun
Signal
How does this article make you feel?