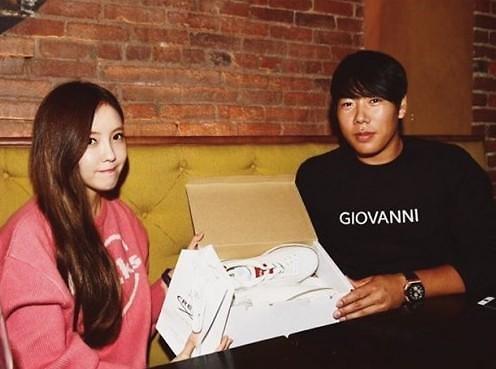 T-ara‘s Hyomin and Kang Jung Ho, a third baseman and shortstop for the Pittsburgh Pirates in Major League Baseball, are in the spotlight today as a possible celebrity couple, but both sides deny a romantic relationship.

Earlier, local news source Ilgan Sports reported that Hyomin and Kang Jug Ho have been dating for about three months. Hyomin, who has known Kang Jung Ho as an acquaintance, was asked by the athlete to throw the ceremonial pitch at a game in the U.S. in September of last year. At that time, Hyomin had told Ilgan Sports, who was covering the event, that she met Kang Jung Ho through an introduction by an acquaintance and were like brothers and sister.

Hyomin had arrived in the U.S. on September 12 to show her support for Kang Jung Ho and stayed until September 16. During that time, according to Ilgan Sports, the two felt something more than friendship, spending time touring and eating on the days without a game. They reportedly ate a pretty restaurant at a high altitude and also rode the cable car together. A source, who observed the two during that time, said, “There was something more than a brother-sister relationship. Kang Jung Ho was very caring towards Hyomin and Hyomin was worried about not being a burden to Kang Jung Ho.”

Apparently, Hyomin was a great source of support when Kang Jung Ho was injured after her visit, sending him messages and calling him. They officially started a romantic relationship, albeit long distance, in January of this year. “They talk every day,” says a source,” even though Kang Jung Ho is busy with rehab and Hyomin has her schedules.”

Both sides are denying this report, however, saying that they are just in a good brother-sister relationship. Kang Jung Ho’s agent, Octagon, is also saying that they will take strong legal action against the source that reported the dating story. Hyomin’s agency, MBK Entertainment, says that the two have never met after the ceremonial pitch event and are just on friendly terms, not romantic. “She did send him messages of support after his injury, but they are just like brother and sister,” says a rep from MBK.

You can watch Hyomin’s opening pitch from September 2015 below.