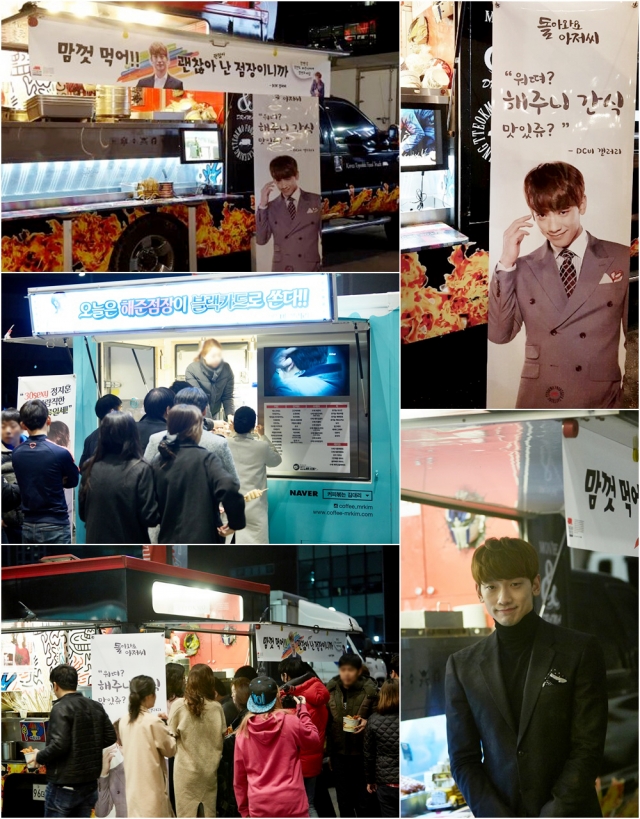 Fans of singer/actor Rain, who is currently acting a double role in SBS‘s Wednesday-Thursday drama “Please Come Back, Mister” (written by Noh Hye Young, directed by Shin Yoon Seop) as Lee Hae Joon, the elite, handsome second generation chaebol manager of a department store and a long-time section head of the store who miraculously becomes Lee Hae Joon, sent food cars to the set of the drama to support the actor and the crew.

Meal and coffee cars decorated with witty banners such as, “Today, it’s on me (manager Hae Joon)” and “Eat up! It’s okay since I’m the manager” were prepared on the set.

As many actors/actresses and staff had been filming since the early morning, despite the unexpected cold, the food cars sent by the fans were a godsend that was greatly welcomed by everyone who needed to continue filming through the night.

Not only did Rain personally thank his fans who came to the filming location, he also showed his warmheartedness by serving food to the staff and actors/actresses.

Rain commented by saying, “Due to the nature of the human fantasy comedy genre, everyone, including the actors/actress and staff, are selflessly working as one and doing their best on each scene in order to create a good drama” and “I would like to sincerely thank the fans for caring for the whole drama team while we are working so hard and for giving us your continued support. It’s a very big help. I will work even harder on filming thanks to your support so please look forward to it until the end.”

Meanwhile, “Please Come Back, Mister” airs every Wednesday and Thursday at 10 p.m.

Watch the latest episode of the drama below: