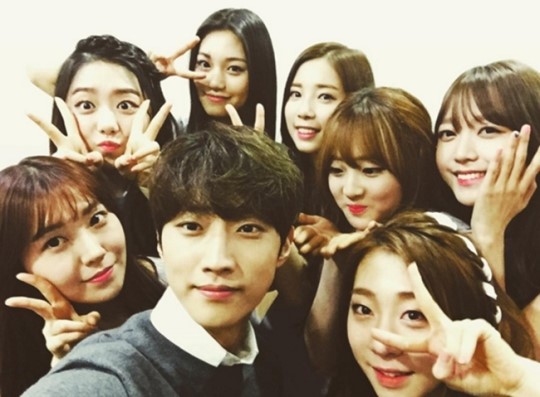 B1A4‘s Jinyoung has been garnering attention since appearing on cable channel Mnet‘s survival program “Produce 101” as a music producer, instead of a singer.

His self-composed track, “In the Same Place,” which was gifted for the evaluation of 35 aspirant girl group trainees, won first place after being performed by Girls On Top.

As an idol “sunbae (senior),” Jinyoung showed his thoughtful side by showing concern for his juniors’ vocal conditions. His strict directing as a producer helped to perfect the song overall. His passion as a producer was apparent as he visited the filming locations of the show to better understand the voices of the “Produce 101” trainees who would choose his song and even looked up their audition videos.

Although the recording process wasn’t smooth all the time, as shown in the broadcast, Jinyoung cheered on his juniors as a producer and as their senior.

Kim Sohye is probably the trainee which caused the most worry for viewers and trainers alike initially in the program, although she has come a long way.

Jinyoung also went on to complement the other trainees of Girls On Top. He commented that, “main vocal Yoo Yeungjung has a clear and powerful voice while leader Kang Sira‘s emotion and skill are very versatile” and “I was worried that Han Hyeri‘s voice might stand out too much because it is very young-sounding but she was really soulful and did really well.”

Lastly, he picked Kim Doyeon as the trainee that fit the song the most and complemented remaining trainees Yoon Chaekyung and Kim Sohee on their unique voices, showing his deep affection for his juniors as their producer and sunbae.

Produce 101
B1A4
Girls on Top
Jung Jinyoung
How does this article make you feel?