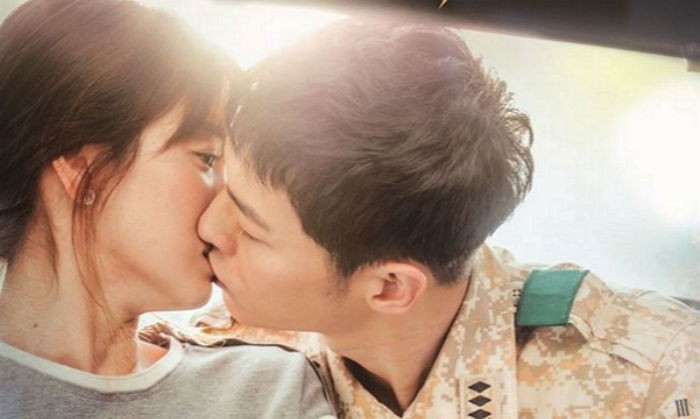 It’s difficult to fully describe the popularity of KBS2‘s “Descendants of the Sun” in mere phrases such as “explosive” and “sensational.”

This is especially so since most dramas on mainstream networks have an average viewer rating of two to three percent, whereas “Descendants of the Sun” reached the 33 percent mark just last week.

And it’s not just domestic fans who have been taken by the love story between a soldier and a doctor set in wartime setting, but also those from Asia and all over the world.

Producer Lee Eung Bok of “Descendants of the Sun” sat down for an interview to share his views on the success of the drama.

The PD began by saying that, “The viewers’ response to the drama is like a dream. For us staff members who have been working on this project for over a year in a sort of ‘one-sided relationship,’ the current love from the viewers really means a lot to us.”

Regarding passing the 30 percent mark for viewer ratings, PD Lee said that he was glad they were able to break stereotypes such as “30 percent ratings is impossible nowadays,” “spring is the off season for dramas,” and “there has been no case of a large-scale production/pre-produced dramas becoming successful”; by confirming the simple truth that “people will watch something if it’s entertaining.” He commented that any theme can work as long as it is well-made and he hopes that “Descendants of the Sun” will be a source of encouragement for other drama production staff who are attempting new endeavors.

When asked about the reason behind the incredible success of the drama, PD Lee said that, “The reason for the success of the drama is because it is entertaining in various ways and also deeply moving. The writer did a good job on the story and the actors portrayed it really well. The deciding factor for the success also include the inclusion of star writer Kim Eun Sook in “Descendants of the Sun,” its airing on KBS, and the casting of Song Joong Ki and Song Hye Kyo. Although all of these events may seem like it happened by chance, looking back, I think fate had a hand in it. Not everyone, including the writer, actors, and production staff were first priority picks but they ended up being the best choice.”

Despite previous unsuccessful cases of dramas with high production costs and inclusion of top actors, PD Lee commented that they weren’t overly concerned about the possible failure of “Descendants of the Sun” because the “script and acting were very good.” However, he did mention that it was difficult to determine how to portray the large-scale action scenes while staying within budget, since investing a lot on the effective presentation would be costly while not investing enough would make the scenes less believable.

What do you think contributed the most to the drama’s success?

Watch the drama at Viki below!