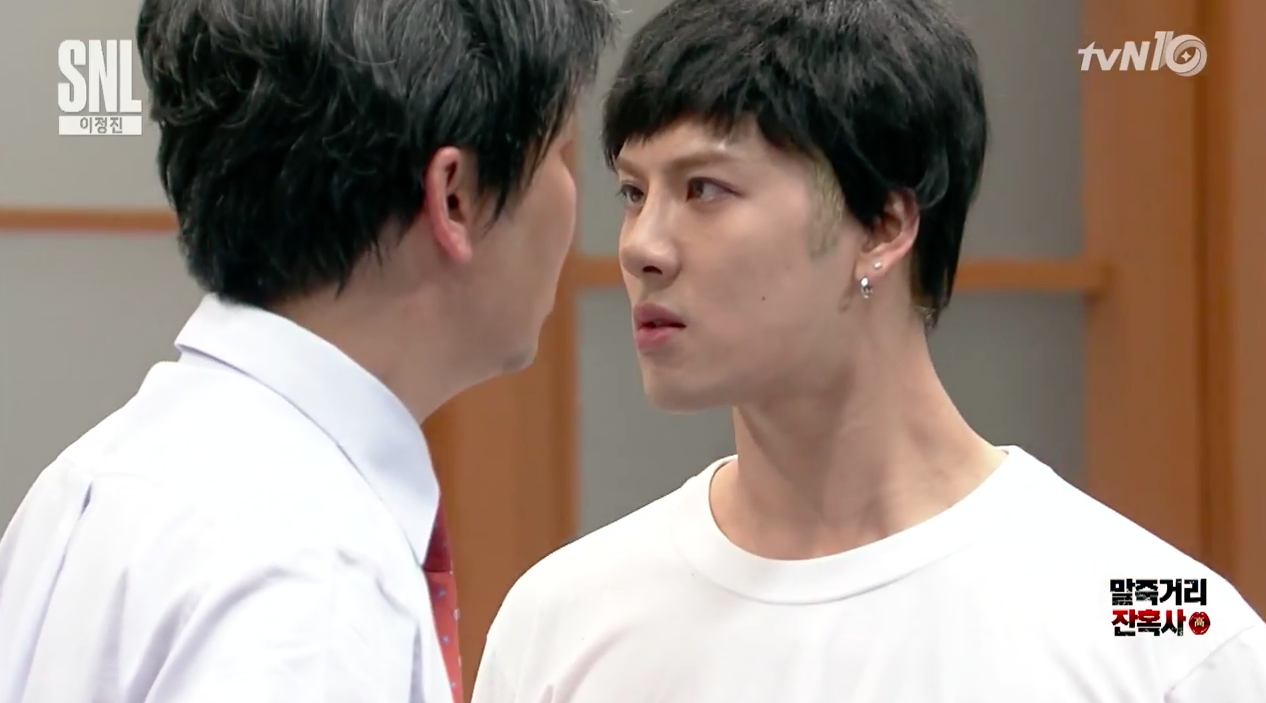 GOT7 member Jackson makes a special guest appearance in a live sketch on the April 9 episode of “SNL Korea,” which is hosted by his friend and former JYP Entertainment label mate Lee Jung Jin.

The sketch parodies Lee Jung Jin’s 2004 film “Once Upon a Time in High School,” which is set in a school where the students have formed violent gangs and the teachers take any excuse to use extreme corporal punishment.

Lee Jung Jin, Jackson, and the show’s cast star in the parody on “SNL Korea,” which puts a funny twist on the film’s storyline. When two students at the school get angry with one another, they face off as though they’re about to pummel each other in a fist fight. But one of the students, Lee Jung Jin, kisses his opponent on the cheek instead!

Although the show’s audience screams in surprise and laughter, the other students in the class react as though he’s just dealt the other student a painful blow. The “fight” continues to escalate with Lee Jung Jin at its center as Jackson can be seen watching in the crowd of students.

Later on, Shin Dong Yup plays a teacher who’s about to punish Lee Jung Jin for acting out by giving him a kiss on his backside, instead of hitting him with a baseball bat as a teacher does to a student in the film.

However, Jackson steps in and tries to stop the “violence,” yelling at the teacher that Lee Jung Jin hasn’t done anything wrong. When his teacher questions him angrily, Jackson takes out a pair of nunchucks. “No, you can’t,” says Lee Jung Jin, but Jackson yells, “I can’t take this anymore!”

He then leans in and gives Shin Dong Yup a kiss right on the lips, which is enough to knock the teacher off his feet. Watch the video below!

During the closing of the show as the cast and guests say goodnight to their audience, Jackson jokes, “Shin Dong Yup’s lips are really soft.”

Catch more of Lee Jung Jin and the full sketch with Jackson in April 9’s episode of “SNL Korea”!