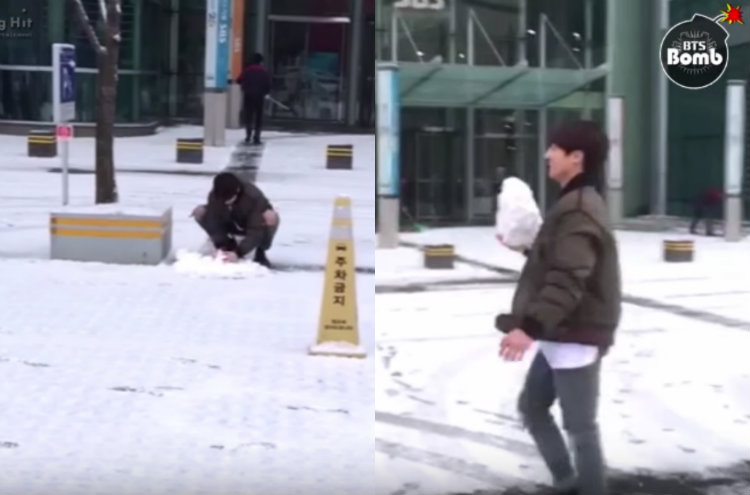 BTS’s “Golden Maknae” is well-known for his competitiveness among fans and his fellow members, and in the latest video from BTS’s “Bangtan Bomb” series, in which we get little clips of the group behind the scenes, Jungkook does not fail to meet expectations.

The clip is filmed by member Jimin and it takes place this past winter, after a snow storm, and the ground is covered with it. The members (J-Hope, V, Jin, and Jimin) are in the midst of a snowball fight when Jungkook appears. V calls him out as a target to which Jungkook whines, “Why me?”

A bit later, you see the members run in fear as Jimin films Jungkook coming towards them with a huge snowball, and Jimin points out, “The weight of that snowball!” He also comments later when Jungkook is making a new snowball, “He’s making a snowball the size of his face!” He says to Jungkook, “Someone is going to die if they get hit by that!”

Unfortunately for Jin, he is Jungkook’s target. V also attempts to throw a snowball at Jungkook, but misses, and Jungkook attempts to make even a larger snowball that has his fellow members both laughing and running in fear.

See how the snowball fight turns out for yourself below!

BTS is soon returning with the third and final part of their “youth” series through the special album titled “Young Forever.” The first two were “The Most Beautiful Moment in Life (Hwayangyeonhwa) Part. 1″ and “The Most Beautiful Moment in Life Part. 2.” “Young Forever” is out May 2, after which BTS beings their “2016 BTS LIVE Hwayangyeonhwa On Stage : Epilogue” tour on May 7-8 at the Olympic Gymnastics Arena in Seoul.

Support the artist by buying BTS – Young Forever from YesAsia
How does this article make you feel?