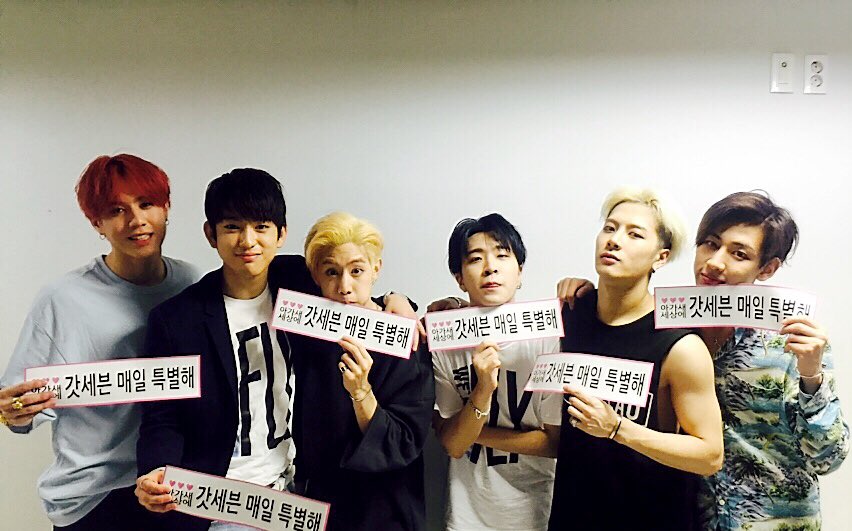 The SK Olympic Handball Gymnasium is said to have been a sea of tears as GOT7’s leader JB came out on stage to greet fans despite his back injury at the first day of “Fly in Seoul” concert series.

Only a couple of days before the concert, it was announced that JB would not be able to perform as his group’s first concert, due to a spinal disc injury. It was also announced on the day of that JB would be getting further examinations at the hospital, and many fans expressed sadness at being unable to see JB at the concert, but were more eager to wish him a quick recovery and to ask him to prioritize health above anything else.

So it was a surprise to see JB come onto the stage near the end of the April 29 concert, and as fans watched the other members support him, many burst into tears. JB, however, despite being unable stand for a long time, showed a brave face and a smile to his fans, telling them not to be sad and have fun at the concert. He assured them that he will come back stronger and that he won’t let something like this keep him down.

There was a moment when the members were bowing, and Jackson put up his hands to keep JB from bowing since it will hurt his back, but JB moved away his hands and continued to bow deeper.

JB is currently receiving treatment and JYP Entertainment has stated that they are prioritizing his health above all else.

At the end of the concert, GOT7 released an image on their official Twitter account that has the six members (JB not included) holding up a sign that says, “In IGOT7’s world, GOT7 is special every day.” The image was captioned with “Thank you, thank you, to IGOT7 who made #GOT7 1st Concert ‘Fly in Seoul’ so bright. Return home safely! IGOT7 Thank you for coming! Love you all!”

GOT7 holds the second day of “Fly in Seoul” today, April 30 KST.

You can watch a fancam of JB’s appearance below.

GOT7
Jackson
JB
How does this article make you feel?