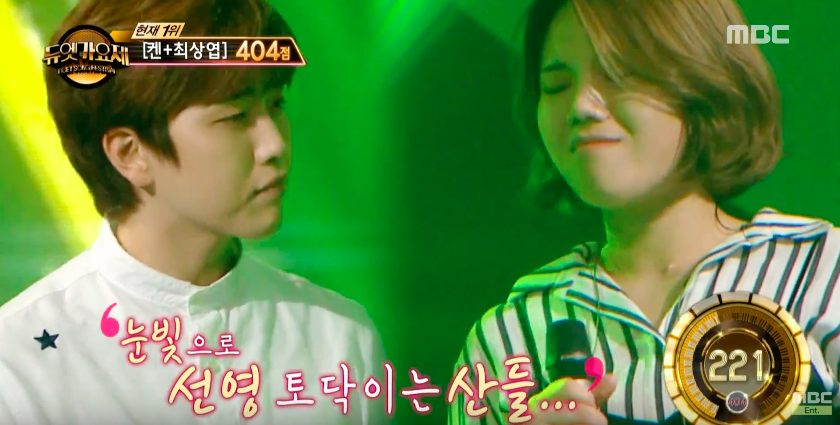 Watch: B1A4 Member Sandeul Shows He Is As Kind As He Is Talented

B1A4 member Sandeul’s talents as a singer are well-known but he also showed how kind and understanding he is on the recent episode of MBC’s Duet Song Festival.”

On the April 29 episode of the MBC variety program, singers competed against OST queen Lyn for a chance to win on the show, including Stephanie, Ken of VIXX, and Defconn. Sandeul and single mother Cho Sun Young are the fifth contestants on the show. The two of them choose to sing “As One Says” which became popular through the “Infinite Challenge Music Festival” when Yoo Jae Suk and Lee Juk sang it.

Sandeul introduces the song, saying, “This song represents Sun Young noona’s heart,” as he starts the song with his gentle voice. Cho Sun Young follows soon afterwards, her emotions intertwined with her vocals.

However, she begins to have some difficulty with her voice as she sings, her pained emotions coming through on her face. When he notices, Sandeul sings with even more passion, nodding and looking encouragingly at her as he supports her vocals.

As soon as the performance finishes, as Cho Sun Young apologizes, Sandeul embraces her. Backstage, they celebrate as they realize they’ve received 410 points and thus, Sandeul and Cho Sun Young are the victors for the episode.

Single mother Cho Sun Young seemed nervous as she stood on stage in front of more than 500 audience members. However, with Sandeul next to her, supporting her, they were able to pull off an incredible performance. More than anything, Sandeul’s kindness shone through the performance on this episode.

Perhaps due to the this inspiring duet, this episode of “Duet Song Festival” rose 1.8% to end with ratings of 8.1%, the highest its achieved since its inception into regular programming on April 8. After the first episode, in which it premiered with ratings of 7.6%, it actually dropped as low as 6.3% in the following episodes. However, with this recent episode, it is now knocking at the doors of 10%.

Check out their heartwarming duet below!

Duet Song Festival
B1A4
Sandeul
How does this article make you feel?