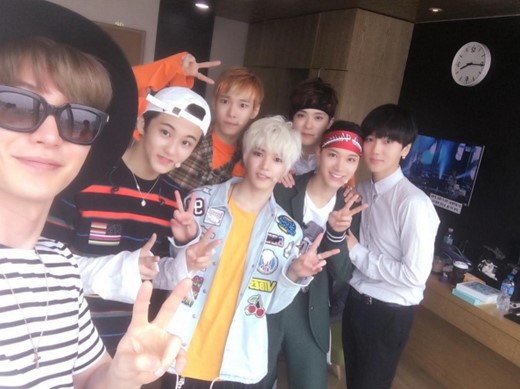 SM Family Is One! Leeteuk And Yesung Show Support For NCT U

It’s always nice to see members of SM Entertainment showing support for each other!

On April 30, Leeteuk posted a photo of him and Yesung posing next to the members of NCT U, along with the caption, “#NCT #Yesung #Leeteuk #Happy #Everyone #Hwaiting”

The photo appears to have been taken backstage at this week’s “Music Core.” Smiling and looking friendly, the idols pose for the camera with Leeteuk, who is the only one currently not appearing on music shows, snapping the photo.

Meanwhile, both Yesung and NCT U are pursuing active promotions for their title tracks. Yesung made his long-awaited solo debut with “Here I Am” on April 19, while NCT U debuted on April 6 with “The 7th Sense,” marking the debut of SM’s new project group.

NCT
Super Junior
NCT U
Leeteuk
Yesung
How does this article make you feel?