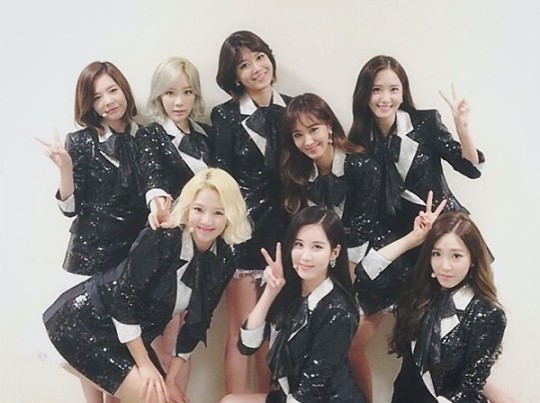 This week, girl group Girls’ Generation completed the Taipei leg of their “Phantasia” tour. Member YoonA posted a group picture of all eight members on her Instagram account in commemoration of the event. In the picture, the girls show off their sisterly affection sporting warm smiles.

She also posted a witty caption, “We had a concert, but why didn’t you come, Jo Se Ho oppa?” Her comment refers to a running joke celebrities have used to poke fun at comedian Jo Se Ho.

In the past, BIGBANG members Taeyang and G-Dragon jokingly referenced the same Jo Se Ho joke, asking similar questions on social media: “Hyung, why didn’t you come?” and, “Why didn’t you come to our Japanese fan meeting?”

The joke that is referenced originates from Jo Se Ho’s appearance on MBC’s “Quiz to Change the World” last year. The comedian is asked why he had not gone to Ahn Jae Wook’s wedding by singer Kim Heung Gook in response to his comment that he takes care to remember special events of his celebrity colleagues. Jo Se Ho’s incredulous reaction, “Who is that? How can I go when I don’t know them,” and his deadpan facial expression became viral soon after, with netizens and celebrities alike joining in on playfully making fun of the comedian ever since.

Girls' Generation
Jo Se Ho
YoonA
How does this article make you feel?