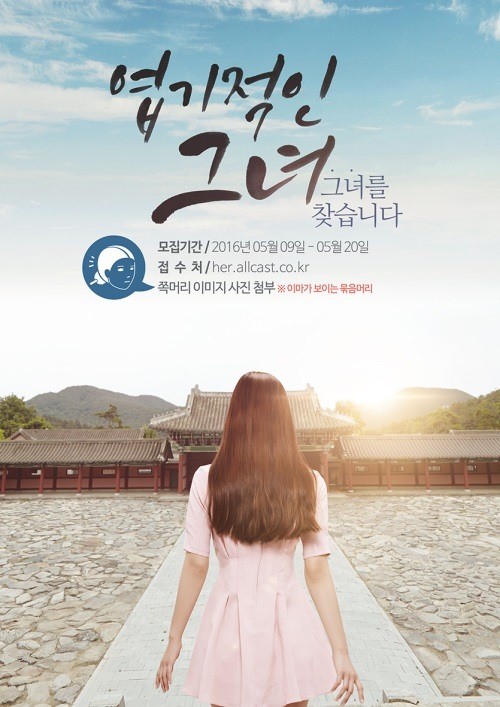 The search for the female lead of the drama version of “My Sassy Girl” will be a large-scale casting project.

The “My Sassy Girl” drama, is garnering interest through the casting of Joo Won, who boasts a distinct style and strong acting abilities in every one of his projects. The drama goes further and will begin the first large-scale national audition to find the actress to play the female protagonist.

The drama is one based off of the youth romance film of the same name which gained fame across Asia, including China, Korea, and Taiwan, for the hilarious relationship between the fussy male protagonist Kyun Woo and the sassy female protagonist.

The auditions for the drama version of “My Sassy Girl” is notable for its fresh attempt at selecting the female lead through open auditions and it will deviate from the existing casting systems in order to find talented individuals with acting ability, potential, and talent. The assessment criteria will be based 45 percent on the points given by the evaluation committee, 10 percent on points from actors, and 45% on points from netizens. The proportion of netizen votes will be accumulated as 30 percent from Naver for Korea, 10 percent from V LIVE for the global votes, and 5 percent from Le.com for China.

The key point of the audition is that the public can participate in the casting process for the female lead as well as vote for the candidates.

Any female applicant between ages 20-30 can apply for the “My Sassy Girl” drama auditions and individuals of all occupations, from a normal student to aspirant actress as well as new or experienced actresses, can take part in the auditions. Applications will be taken from May 9 to May 20 on the All Cast “My Sassy Girl” homepage and the successful applicants for the document screening are expected to be announced on May 24.

Those who pass the document screening will have the chance to take the second audition screening, which will last for two days. Large-scale, national voting will take place through Naver for the ten who pass the second screening.

An affiliate of the “My Sassy Girl” drama commented, “The female protagonist for ‘My Sassy Girl’ is an important individual who must express the uniqueness and personality specific to the drama. That’s why we expect making the drama and the search for the ‘girl,’ with participation from individuals in Korea, China, and Japan, to be a very fun and interesting event.” The affiliate added, “Joo Won is expected to actively support the auditions so we ask for your interest and participation.”

Meanwhile, “My Sassy Girl” is a completely pre-produced drama which is expected to air simultaneously in Korea, Japan, and China in early 2017.

My Sassy Girl (drama)
How does this article make you feel?