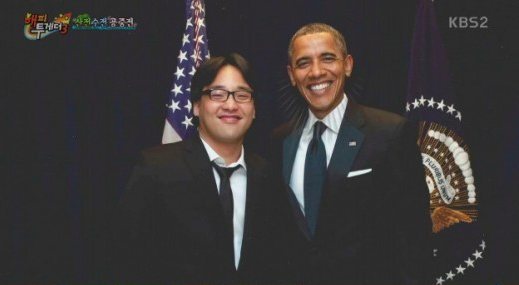 Han Hee Jun, who made it to the Top 9 on the 11th season of “American Idol,” is known for his goofiness and funny comments to those who watched the reality tv show. Eric Nam also backed Han Hee Jun’s well known humor. “Han Hee Jun is the first Asian to make it to the Top 9, but his sense of humor also caught a lot of attention.” When the MCs ask ,“Isn’t John Park more famous?” Han Hee Jun jokingly replies, “The American Idol staff forgot about him.”

The “American Idol” contestant also talks about meeting boxing champion Manny Pacquiao, Jennifer Lopez, and even the President of the United States, Barack Obama. Han Hee Jun shares that he said to President Obama, “Looks like politics is difficult for you these days, you have a lot of white hair.” Despite being warned by security not to talk about politics, Han Hee Jun’s comment made President Obama laugh. Han Hee Jun adds, “President Obama was probably smiling the widest in the picture he took with me out of all of the photos he took that year.”

Watch a short clip of the episode below:

Han Hee Jun
Happy Together
How does this article make you feel?