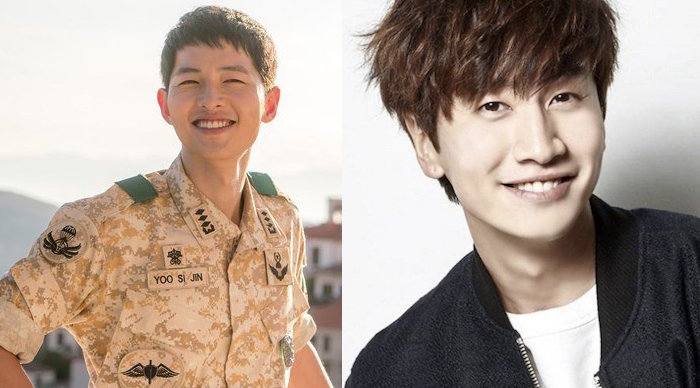 Actor Song Joong Ki talked proudly about his close friendship with Lee Kwang Soo during his fan meeting in Beijing.

The event was held on May 14 at the Olympic Sports Center Gymnasium with around 5,000 fans in attendance, proving just how popular the actor has become after his recent starring role in the hit drama “Descendants of the Sun.” During the two-hour event, he greeted his fans in Chinese, played games, sang with Park Bo Gum, and read a letter of thanks.

Song Joong Ki told his fans, “There are apps like Baidu and Weibo, but I don’t use them since I don’t know how, so Lee Kwang Soo is updating people about my whereabouts instead. If there’s anything you want to know about me, please contact Lee Kwang Soo.”

At one point in the fan meeting, Song Joong Ki played a game called “Yes or No.”

The actor was asked if he looks at himself in the mirror and makes cool poses after showering. He answered, “No, because I’m shy.”

When he was asked, “What if the girl with short hair is ugly?” he made the audience laugh by joking, “As long as she’s prettier than Lee Kwang Soo, it’s fine.”

The next question was if he likes Lee Kwang Soo more than girl groups, and the actor answered without a moment’s hesitation, “No, I like girl groups more.”

Finally, Song Joong Ki flaunted his close friendship with Lee Kwang Soo, who he named as one of his necessities for his travels. He stated, “I need Lee Kwang Soo to tag along. Someone has to spend money for me.”

He continued, “Just kidding. He’s a really close friend of mine, so if we find the time, we should go on a trip together.”

Meanwhile, Song Joong Ki’s “2016 Asia Tour Fan Meeting” continues throughout May and June all over China.