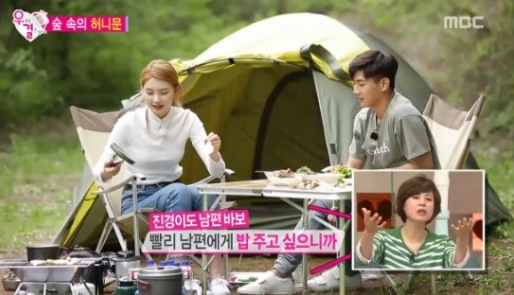 On the recent episode of “We Got Married” that aired on May 21, the new couple, MADTOWN’s Jota and model Kim Jin Kyung, go on a camping trip as their honeymoon. They are instructed to build a tent and spend the first night there.

As they are trying to set up the tent, Jota tells Kim Jin Kyung, “You don’t have to do anything.” Kim Jin Kyung politely says thank you and Jota starts flaunting his masculine charms.

During his individual interview, Jota says, “I was just thinking about setting up the tent quickly because Jin Kyung might be tired. I don’t know when it happened, but we started addressing each other comfortably somewhere along the way.” 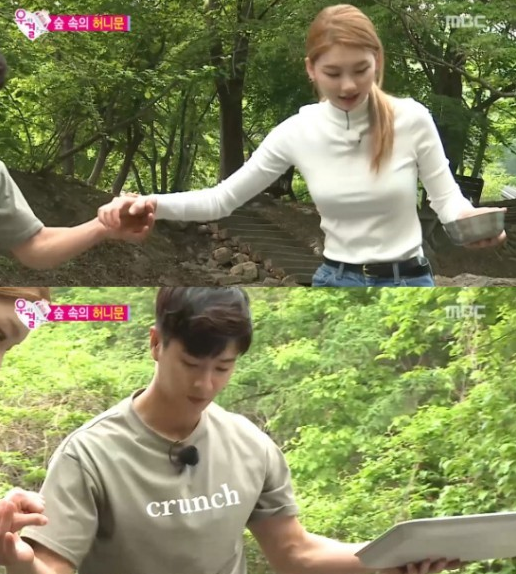 During the show, Jota continues being a gentleman, like helping her cross the stream or working with hammers. During Jin Kyung’s interview, she confesses, “He was a man. He would come to help right away when I was in a dangerous situation.”

Since he’s working so hard, Jin Kyung suggests that she prepare the food for him. However, this being her first time making food outdoors, the rice doesn’t come out perfectly. Not knowing her own mistake, Jin Kyung tells him that the food is ready and Jota eats the rice quite well. Later, he says that her kind mindset to want to do something for him made him overlook her cute mistake. 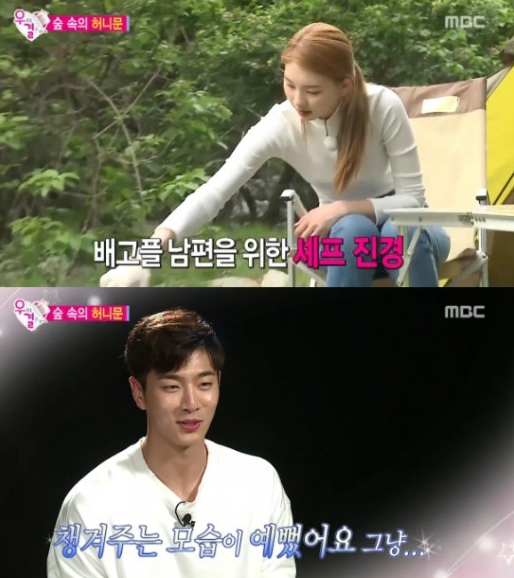 Kim Jin Kyung later gives Jota some homemade cookies and Jota also gives Kim Jin Kyung a book as a present. When she sees the book, she becomes surprised because it happens to be the book that she is currently reading.

When they realize they share a similarity, the two seem to get a bit closer than before. Fans are more excited to see how the two will advance in their relationship as the show continues.

What do you think of this new couple?